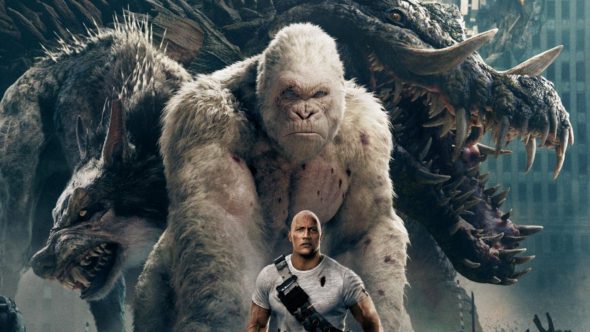 Here’s something I never thought I’d say: I miss the cohesive vision of Battleship, a movie that is no longer the dullest adaptation of a game. That’s because Rampage exists, the latest video game adaptation to suggest that Hollywood is intentionally tanking these things to convince audiences that movies are a superior medium.

To be fair, there are far worse adaptations out there. Rampage reunites director Brad Peyton with disasters, Dwayne Johnson and green screen destruction, last seen together in San Andreas (2015). Peyton knows how to keep the action moving along, and Johnson is extremely adept by now at oozing charm no matter how nonsensical the material.

Johnson plays primatologist Davis Okoye, whose beloved gorilla George is one of three beasts who fall victim to rogue genetic engineering and cut a destructive path through the country as they all converge on the company responsible for their mutation.

Because some tension is needed to pad out the sparse story, Okoye is joined by genetic engineer Dr. Kate Caldwell (Naomie Harris) and government agent Harvey Russell (Jeffrey Dean Morgan), who all have reservations teaming up at first but come to learn that they have more in common than not. For example, they are the only three people involved in the relief effort who think maybe it’s not a good idea to level a major American city.

Sure, the plot is inane and the dialogue breaks new ground in expository heights—especially from the film’s human antagonists, corporate baddies Claire and Brett Wyden (Malin Åckerman and Jake Lacy, who do about as much as possible for being tasked with Explaining Things We Just Saw a Minute Ago).

Rampage’s script-by-committee strives to meet some golden ratio of one-liners and world-ending peril. And the cast is game, plainly knowing what they’ve signed onto. But something still feels off, and it’s a fatal problem for a movie like this when the biggest tension isn’t onscreen but rather a nagging conflict between millions of dollars and who knows how many studio honchos never quite committing to whether this should be a serious property or a popcorn flick.

While the Rampage video game series managed to pay tribute to its monster movie conventions as much as it tore them down, all of that gets ignored for something so by-the-numbers that the number of people credited for the screenplay is the only thing less believable than the movie’s treatment of genetics. (Also physics.)

And as if Rampage needed any more off-screen problems, Warner Bros. isn’t doing themselves any favors by reminding people of King Kong and Godzilla at a time when the studio’s “MonsterVerse” is giving those properties insightful, visually distinct and even daring reboots.

If you’re under the age of 13 and might enjoy seeing The Rock swap crude jokes with a CGI gorilla—or if you’re over the age of 30 and have an inexplicably intense connection to a niche video game series—then there’s a chance Rampage is for you.

Otherwise, it’s a muddled genre substitute for the real thing. Save your quarters.

← Fright Club: Mothers and Daughters in Horror
Woman on the Verge →
Scroll Up