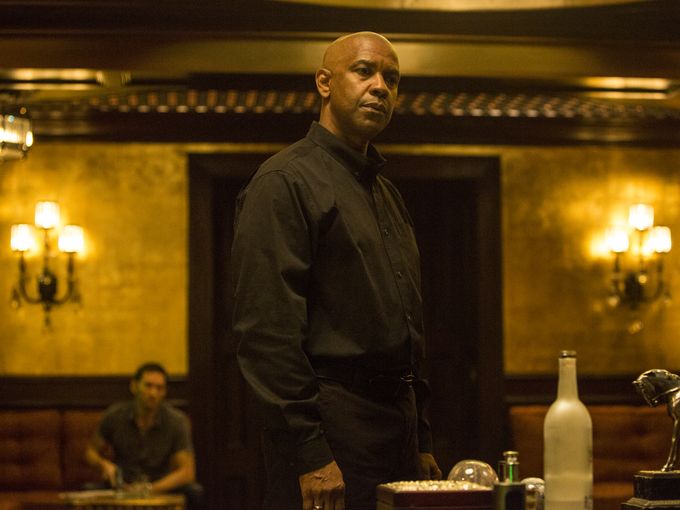 The title The Equalizer probably should have been used in a late 80s Schwarzenegger flick, with a catch phrase like “You plus me equals..dead!”  Instead, it was a late 80s guilty pleasure TV series, with Brit Edward Woodward starring as an ex-covert op specialist helping those with nowhere else to turn.

Actually, the big screen version may remind you more of Taken, with Denzel Washington as the new hero with a particular set of skills. No offense to Liam Neeson’s ass-kicking resume, but if Liam is bad then Denzel is superbad, and he and director Antoine Fuqua make The Equalizer a ton of fun.

Be aware, though, it’s plenty violent, as gentle hardware store employee Robert McCall (Denzel) awakens his mysterious past after befriending a young hooker (Chloe Grace Moretz, redeeming herself well after the If I Stay disaster). When she’s badly beaten, Robert takes very bloody revenge, and that doesn’t sit well with the Russian mob controlling the prostitution ring.

Washington and Fuqua again prove a formidable team. But while their Training Day was infused with a gritty mean streak that story deserved, The Equalizer‘s violence is all about style, with Fuqua using slow motion techniques and flashy panning shots to offset the brutality.

Denzel is equally effective bringing some humanity to his role as vigilante. McCall is picky and meticulous in his personal life, with a caring interest in his coworkers. Yes, there’s some cheesy humor and a few clunky metaphors (a chess game, reading The Old Man and the Sea) but Denzel absolutely sells it. Did we really think he wouldn’t?

Though the film is a tad long at 131 minutes, Fuqua’s pacing is on the money. He knows how to build palpable tension before an oncoming beat down, and he knows when it’s more effective to skip the fight altogether, letting a single “after” shot (bloody eyeglasses) do the talking.

It can’t go unmentioned that intended or not, cliched moments in The Equalizer gain more heft from memories of recent news headlines. What might have otherwise fallen a bit flat ends up reinforcing the entire theme of justice for the common folk.

The ending certainly leaves the door open for sequels, and as long as the Denzel/Fuqua team is intact, I’m in.