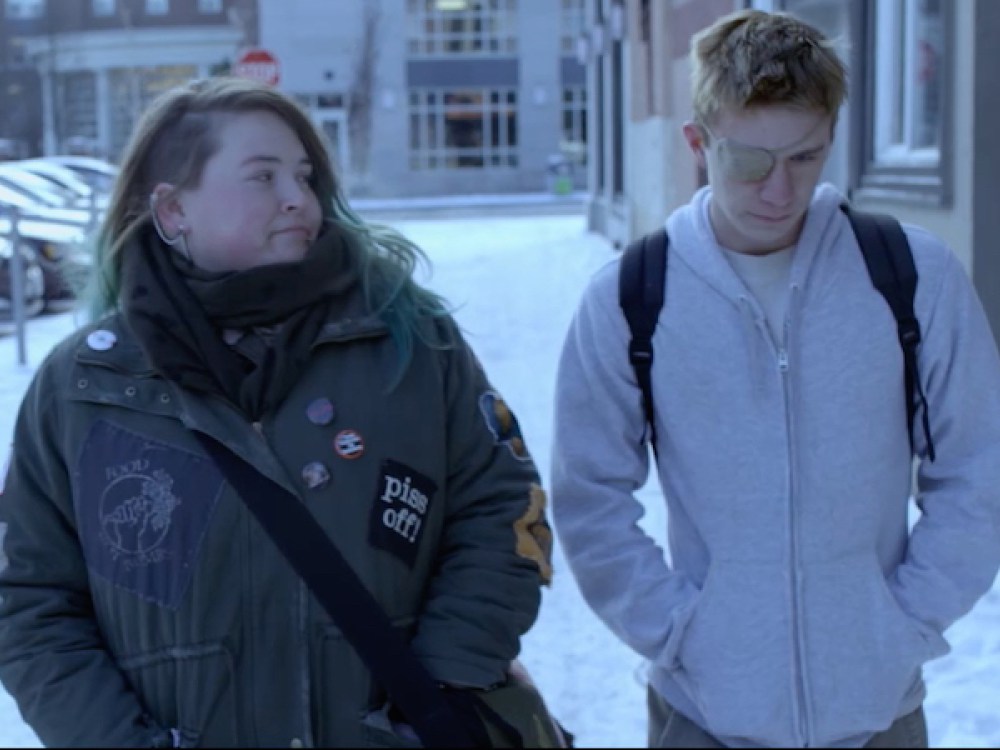 High school, amirite? Setting of so many movies: The Breakfast Club, Heathers, Clueless, Mean Girls… and lately, Some Freaks, written and directed by Ian MacAllister McDonald.

McDonald’s perspective on high school is bleak, lonely. The other kids whisper about you behind your back, when not being physically menacing. The adults are absent. And even your closest friends are kind of douchey, sensing your weak spots and needling them under the guise of jokes.

The action starts with a one-eyed dude named Matt (Thomas Mann), who is stalked by classmates desperate to see what’s under the eyepatch. And maybe capture a photo of the gaping hole to upload to the internet.

He’s partnered up with the new girl, Jill (Lily Mae Harrington), to dissect a fetal pig in biology. Turns out she’s related to his only friend Elmo (Ely Henry), a fast-talking wannabe popular kid who monologues about getting into his jock crush’s gym shorts, but is quick to lash out at anyone but Matt who seems clued into his sexuality.

After school, Matt and Elmo chat while playing video games on Elmo’s couch, sharing some misogynistic fat girl jokes. Then Jill walks in.

She’s living with Elmo’s family for a while. She’s fat – and the clear butt of the jokes. But she just lets it slide. Jill has clearly been putting up with this bullshit for years and has a fairly thick skin when it comes to sexism and body shaming.

With this auspicious beginning, Jill and Matt stumble into the sort of romantic relationship you have when your main reason for being there is to put a temporary patch on the gaping wound of your own loneliness and poor self-esteem.

After six months, Matt flies out, step one in his plan to move in with Jill permanently. She’s lost 50 pounds, changed her formerly green hair to a sunny blonde, and traded in her punk gear for a more boho vibe. All the photos she’d sent him were taken before her transformation. He hates it.

Unwilling to let Jill change, Matt attempts to regain the status quo. A quo in which Matt was the only man who could find her attractive (besides “elderly degenerates”), and thus, had no competition. No reason to think about how he measures up to other guys.

Contrary to movies like John Hughes’s The Breakfast Club, the coming together of these teenage misfits doesn’t do much to bond them and bolster their self-esteem. Instead, each of the central characters remains isolated with their own damage, even if sometimes physically close. Their very proximity gives them increased ability to wound each other.

The climax of the film, in which each character attends a party that provides a setting for them to confront their greatest insecurities, seems a little contrived. Some characters are underwritten, making their motivations in these moments a bit confusing.

However, the film is well acted. Each member of the cast does a decent job of portraying their character as a mixture of victim and aggressor. Harrington stands out, providing emotional depth behind her wariness and verbal armor, undergoing an impressive physical transformation for the role.

Some Freaks does not provide a cheery John Hughes ending, but may be a more authentic representation of the high school experience for some.