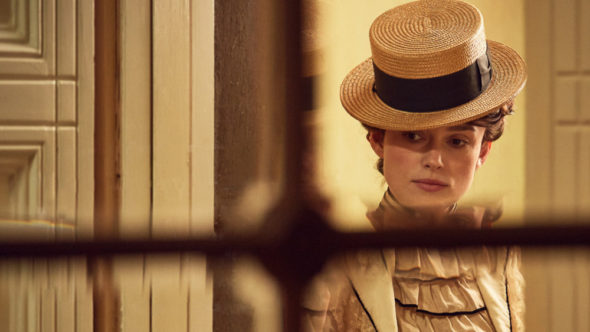 Emotional, entitled, white men seem omnipresent these days. They’re on the news. They’re on social media. They’re on the big screen. At least with the biopic Colette, they are confined to an historical period safely a century behind us.

Colette gives us the origin story of French novelist Sidonie-Gabrielle Colette (Keira Knightley), a Madonna-like figure of the early 1900s who emerged from a small provincial village to become the toast of Paris, reinventing herself over the years as a novelist, mime, actress and journalist.

She wrote frankly about women’s independence, sexuality and aging. She sparked a riot at the Moulin Rouge in 1907 when she performed a lesbian love scene in a pantomime. She was nominated for the Nobel Prize in Literature in 1948. She wrote the book Gigi, which was adapted for the stage where she personally selected a then-unknown Audrey Hepburn for the leading role in 1951. The book then became an MGM musical that won nine Academy Awards in 1958 (including Best Picture). When she died, Colette was the first woman in France to be given a state funeral.

But before all that, Colette married a bully named Willy (Dominic West). Over a decade her senior, Willy was a popular writer who put out music reviews, stories and novels. Quite a bit were written by other people in a factory system where Willy provided the brand, but others produced the work. He compelled his wife to join the team, asking her to mine her childhood experiences so he could publish them under his name. Once the Claudine books became popular, he would lock Colette in a room until he was satisfied she had written enough.

The movie tells the story of Colette’s time with Willy and traces an arc from her awkward introduction into Paris salon society to an eventual break with the abusive hack and first steps toward an independent life.

Knightly is masterful inhabiting the multifaceted Colette, using her eyes to hint at the hurt she’s experiencing while wielding a bold bravado as a shield in her constant verbal fencing matches with her husband. West presents as a believable blowhard—initially charming, then volatile, narcissistic, abusive, and ultimately self-pitying, sniveling and weak.

But when she snaps…it’s so good. Oscar-bait good.

Given this week, I’d have vastly preferred it if more of the movie had focused on the glorious and adventurous life Colette led after she dumped Willy and struck out on her own. But, even so, it’s a story of liberation and the claiming of a woman’s power. Something that’s needed.

I just hope there’s a sequel.

← Hardy Boys
Say Something →
Scroll Up