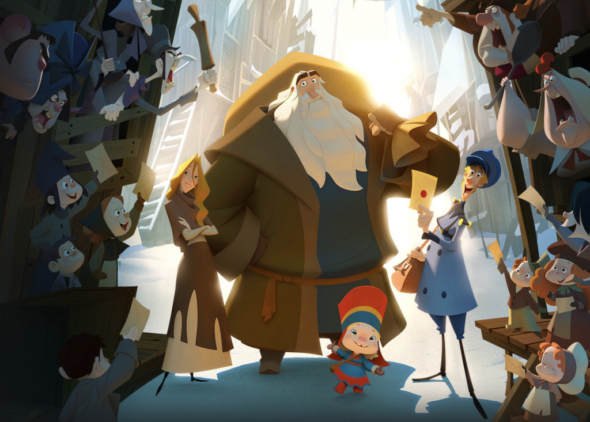 Be honest, when you saw the list of Oscar nominated animated films, did you wonder whether Klaus was somehow the international title for Frozen 2?

I have excellent news! It is not. Instead, it’s a clever, not-too-sentimental Hatfields v McCoys take on the legend of Santa Claus.

Co-directors Sergio Pablos and Carlos Martinez Lopez develop the story of a coddled would-be mailman named Jesper (Jason Schwartzman, perfect). His Postmaster General father tires of Jesper’s spoiled ways and sends him on a make-or-break assignment to the nether reaches of the north, Smeerensburg.

All Jesper has to do is collect and deliver 6000 parcels this year and he can go back to his warm, self-indulgent, cushy little home.

Naturally, there are obstacles. There’s a decades-long feud, for one. It’s so bad the school teacher has turned her school house into a fish market (parents won’t send their kids anywhere they might have to fraternize with the other clan). And then there’s that creepy, disproportionately large, old woodsman.

At times, the twisty tale threatens to collapse under its own weight, but it does not. Instead, it takes risks you don’t often see in family films and those risks mainly pay off. For a Christmas film, the movie manages to mainly avoid schmaltz. It offers clever explanations as to how many of the Santa Claus myths are born, affects just enough of a sense of wonder, and entertains from start to finish.

The vocal talent certainly helps. Flanking Schwartzman are the always welcome JK Simmons as the big guy himself, as well as Rashida Jones, Joan Cusack and Norm MacDonald as a smarmy boatman.

The animation itself is beautiful, but not especially showy. The images won’t disappoint, but they won’t make your jaw drop, either. Instead, Klaus relies on the perfect blend of sentimentality and wit to delight children and entertain their parents.