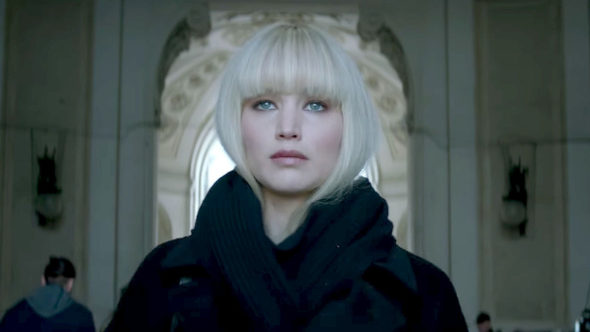 Jennifer Lawrence could use a hit.

Though few could throw shade at the film star’s talent—one Oscar and two nominations in a three year span!—she’s made a series of critical and commercial missteps. The slide began with David O. Russell’s weak biopic Joy, then wallowed in all that can be wrong with a superhero movie in X-Men: Apocalypse before hurtling through space with the underwhelming Passengers, and ending with the flaming disaster (though bold and compelling) mother!

Can her sexy espionage thriller Red Sparrow turn that luck around? Doesn’t seem likely, does it? I mean, come on—you’ve seen the trailer.

And yet, surprisingly enough, the film has some style, some queasying violence and unrepentant perversions, and Jennifer Lawrence. It could be worse.

Lawrence plays Dominika Egorova, a Bolshoi ballerina (yeah, right) who breaks the wrong leg, is related to the wrong uncle (the always welcome Matthias Schoenaerts), makes the wrong compromise and winds up in a nasty state.

Writer Justin Haythe, working from Jason Matthews’s novel, has never written a film worth seeing. This is no masterpiece, but it is the kind of material director Francis Lawrence (no relation) manages well.

The helmsman of the last three Hunger Games films knows how to take what amounts to dreary, ugly, mean tales of human bondage and slick them up with a plucky female lead, good costuming, a talented supporting cast and smooth camera movement.

Lawrence’s steely, emotionless mask of an expression suits this performance even more perfectly than it did her Hunger Games franchise, but the lacking chemistry between the star and her co-stars keeps the film from ever reaching the sexy thrills it hopes to achieve.

Joel Edgerton, playing the good-hearted American, can’t generate any believable connection with Lawrence’s Russian sparrow, and the crissing and crossing of teams and tales and sides and stories feel forever superficial and convenient.

It might at least be a fun time waster if Charlize Theron hadn’t done that better with last year’s Atomic Blonde.

So, no, this won’t be the film to point Jen’s career back toward true north. But she does have another X-Men coming up. That’s sure to be a winner, right?