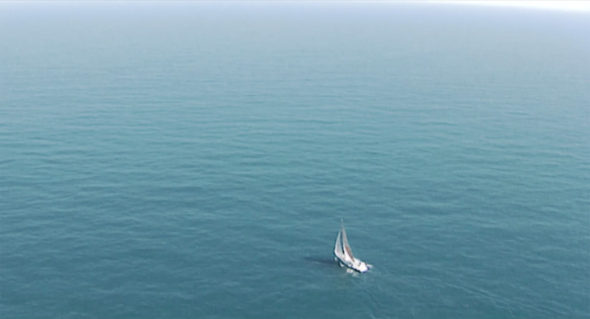 “The ocean’s always trying to kill you. It doesn’t take a break.”

So says Tracy Edwards, and she should know. At 24 years of age in 1989, fresh off a stint as cook on a charter boat, Edwards skippered the Maiden with the first all-female crew to enter England’s Whitbread Round the World Race.

It’s certainly no surprise that the odds were stacked against Edwards, although it is fascinating to look back at just how these sailors were treated by other yachtsmen as well as the media.

According to Jen Mundy, Edwards’s girlhood friend and member of her crew, those set to sail Maiden were told: “You’re not strong enough. You’re not skilled enough. Girls don’t get on. You’ll die.”

Girls don’t get on?

Yes, even as the Eighties came to a close there were enough commonly believed stereotypes about women’s inabilities and bitchy tendencies to sink a yacht. And Holmes is not ready to let those spouting such idiocy off the hook. He interviews a number of journalists, each of whom admit to being convinced the Maiden has no shot at completing the race. The Guardian’s Bob Fisher went so far as to refer to the crew as “a tinful of tarts.”

He actually defends that headline in the documentary.

It’s impossible not to notice that the word “woman” is used maybe twice in the entire film, every participant, even Edwards herself, preferring the term “girls.”

Vocabulary aside, Holmes finds an interesting arc for a sports doc. As the race begins, simply finishing the first leg was cause for patronizing celebration: a bunch of girls didn’t die. Hooray!

But Edwards and crew were, like everyone else in the race in 1989, competitors invested in the competition, focused on winning and only on winning. Unlike their competition, the crew of the Maiden seemed genuinely, even wildly unaware of the profundity of simply participating.

The spirit of female defiance, that’s the flag the Maiden flew at journey’s end. After proving their ability – after besting their competition repeatedly —that celebration lost its patronizing taint.

Scene after windy, wet, terrifying scene—the nautical thrills crisply underscored by Rob Manning and Samuel Sim’s score—skipper and crew of the Maiden strategize, tough it out, and risk a watery grave. And why?

Mainly because one malcontent—Edwards, who’d been suspended 26 times before she was finally expelled from school at 15—wanted to do it and was told she couldn’t.

“What do you mean I can’t? That’s just idiotic.”

← Leap of Faith
F*ck Y’all, We’re From Dayton →
Scroll Up