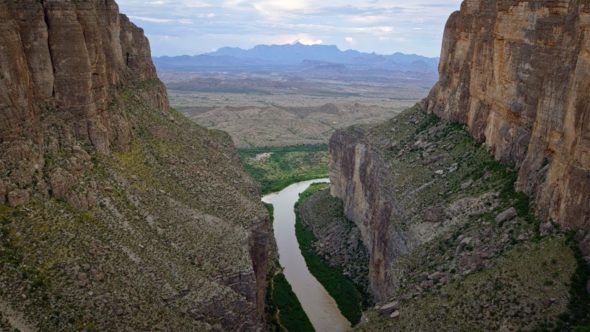 The River and the Wall

Director Ben Masters has an interest in the land along the Rio Grande. In making The River and the Wall, he hopes to show us what makes the area so special.

Along with four companions – two wildlife filmmakers, an ecologist/ornithologist, and a Rio Grande river guide – Masters embarks on a weeks-long, 1200-mile trip from El Paso, Texas to the Gulf of Mexico. They travel along the Rio Grande, the potential site of a border wall that, if erected, would have a lasting, devastating impact on the land.

Most of the film screens like an adventure tale. The companions travel by mountain bike and mustang in places where the river is too shallow for boats. When the river is passable, they journey by canoe. By making the trip in this way, they hope to show the difficulty of the journey in numerous places. It’s an imperfect attempt to emphasize the unlikelihood that immigrants would choose these routes when attempting to cross into the United States.

Along the way, we meet people on both sides of the border. If there are people who live in these areas who are in favor of the wall, Masters and team don’t meet any. From people living in Mexico to ranchers in Texas, everyone recognizes the potential negative consequences to the proposed wall. Even the area U.S. representatives in Congress, Beto O’Rourke, a Democrat, and Will Hurd, a Republican, are opposed to the wall. Hurd states that building a wall “is the most expensive, least effective” method for border security. It’s a rare show of bipartisanship that should give those opposed to the wall some hope.

The cinematography is essential in a film that wants to impart upon the audience the beauty, vastness, and treachery of the land, and the crew is up to the challenge. Numerous shots highlight the diversity of the landscape as the five friends make their way along the river.

In some ways, The River and the Wall effectively states its case that the area around the Rio Grande should be protected. Ecologist Heather Mackey mentions over 150 bird species live in the area, some of which are only located in this area. A wall would disrupt migration patterns, bulldoze protected natural areas, and in effect, cede nearly 1 million acres of U.S. land to Mexico.

However, it is unlikely the film will change the minds of those in favor of the wall. Most likely because they won’t even bother to see it.