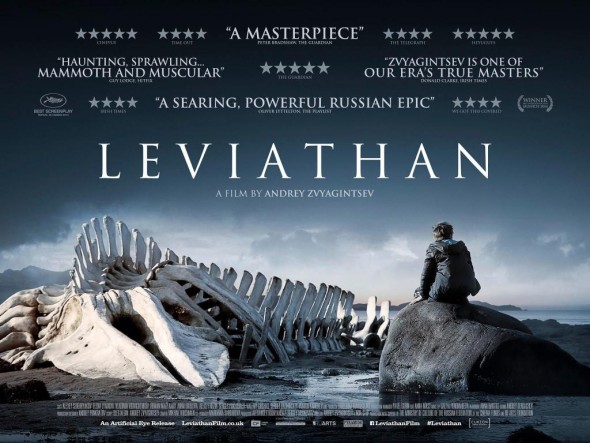 Russia’s contender for the Oscar last week is the devastating everyman struggle Leviathan.

The film is so intimate, so generously detailed yet provocatively ambiguous that you can almost overlook the larger metaphorical drama.

Hard drinking hothead Kolya (Aleksey Serebryakov) finds himself in a losing battle for his own property, a prime piece of beachfront real estate the town’s corrupt mayor wants for his own purposes. Still bullishly optimistic, Kolya calls in a favor from an old army buddy, now a high powered Moscow lawyer. The lawyer has dirt on the mayor, but justice is complicated in Russia.

Zvyaginstev’s vision is one of Russia in transition. Old World practices mesh with a current sense of entitlement from the Orthodox Church, and the newly democratic Russia seems to find its footing in the same old place – the throat of the people.

The film is richly allegorical from start to finish. The visual metaphors, in particular, are sometimes heavy but never unintentionally so. Zvyagintsev means to slap the audience now and again with both the overwhelming plight of the Russian everyman, and with his fighting spirit – boozy and bruised, but hard to extinguish.

Cinematographer Mikhail Krishman’s astonishing photography connects the viewer to the rugged beauty of the Russian land, the very earthliness that holds Kolya so firmly. He can trace his attachment to this plot of oceanside property for generations and without it, he’s terrifyingly untethered – a lost soul.

Leviathan is not without humor, and though Kolya’s plight grows overwhelming in biblical proportions, Zvyaginstev refuses to lose sight of the intimate, personal battle that grounds his epic metaphor.

It’s a breathtaking feat of filmmaking.

← Dead and Loving It
Brilliant Disguise →
Scroll Up