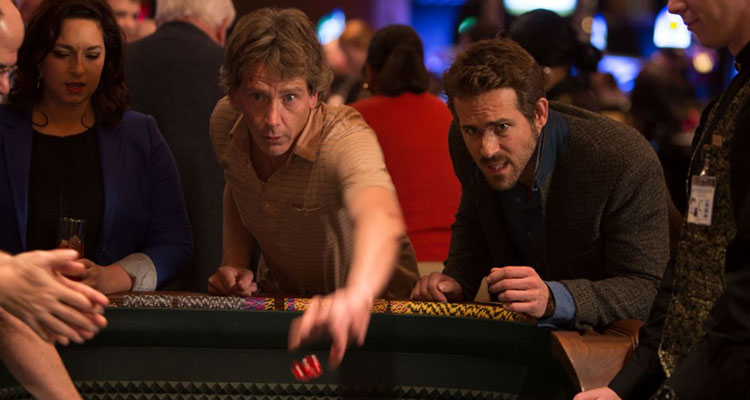 Two gamblers – one a smooth talking charmer and the other a desperate loser – team up for a high stakes road trip to New Orleans, taking all the action they can along the way.

It may sound like a cliche waiting to happen, but if you think you know where Mississippi Grind is heading, think again. Filmmakers Anna Boden and Ryan Fleck (Half Nelson, Sugar) don’t do same old same old. The writing/directing team is more interested in slowly immersing you in a new environment, letting simple truths drip from the intimate details of their characters.

Gerry (Ben Mendelsohn) has a growing list of gambling debts and a daughter he never sees, but things might be looking up. The high-rolling, confident Curtis (Ryan Reynolds) sits down at Gerry’s card game, buys him a drink (“not the cheap stuff, either”) and suddenly Gerry thinks he’s found a lucky charm.

Curtis agrees to Gerry’s idea for the road trip, but questions linger. Sure, Curtis can work a room with the best of them, but is it all just to find his next hapless mark? The film wouldn’t work without two sublime performances to drive it, and there’s no question it works.

Reynolds has never been better, keeping just enough of his usual smirking smart ass persona to give Curtis an extra layer that makes him hard to pin down. Mendelsohn is less of a surprise, as he might be the most consistently great actor that nobody knows. He keeps Gerry a constantly evolving work, equal parts thieving liar and gold-hearted schlub who just needs a break.

Sienna Miller and Analeigh Tipton both make effective use of their limited screen time as working girls who get a visit from the southbound duo. They not only give us added glimpses into the souls of Gerry and Curtis, but they’re also real characters unto themselves.

Boden and Fleck introduce each new locale with postcard perfect shots free of almost all life, another reminder our interest is Gerry and Curtis and where they are going, both literally and figuratively.

With enthralling characters, mesmerizing performances and filmmakers confident enough to stay their own course, it’s a hugely satisfying trip.