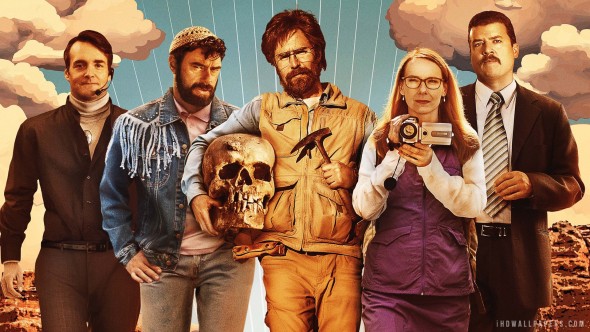 A self-proclaimed biblical archeologist somehow finds holy artifacts that have eluded the scientific and theological community for centuries – millennia, even – and brings them home to the US of A to help one Utah pastor reinvigorate his flock.

A ripe premise, that. The fact that the archeologist is played by Sam Rockwell, and the pastor by Danny McBride, only heightens the possibilities. On top of that, Don Verdean was directed by Jared Hess, co-written with his wife Jerusha, the team responsible for Napoleon Dynamite.

This should definitely work better than it does.

On paper, Don Verdean is a hoot. Add to the capable leads and a satire-rich premise the outstanding supporting cast. Amy Ryan offers an understated tenderness and humor as Don’s faithful assistant Carol, and Leslie Bibb is a stitch in her too-small role as Joylinda Lazarus, former prostitute, current pastor’s wife.

But Jemaine Clement could face criminal charges for the way he steals scenes as Verdean’s man on the ground in the Holy Land, Boaz.

The pieces are there, but the execution is way off. Hess’s film is too sweetly, compassionately cynical for its own good. What humor the film offers is frustratingly laid back, and far too often a tart comedic set up suffers from weak follow through.

The Hesses don’t seem to have the teeth for religious satire. Is Verdean a huckster or a soft but decent man led astray by Satan’s earthly influence, greed? Or is everyone in the film just suffering from idiocy and whimsy in equal measure?

Most disheartening of all is the misuse of Rockwell, who also executive produces. His performance is so low key as to be sleep inducing.

Rockwell and Clement co-starred in the Hesses’ previous effort, Gentlemen Broncos, which was far weirder than it was funny. For their next film they dialed down the weird a bit, but the comedy itself is even more subdued.

That’s unfortunate, because they may have really had something if they’d known what to do with it.