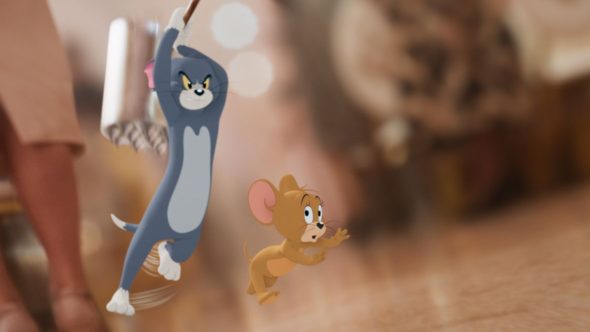 Scooby-Doo is having a moment. The franchise got its first wide release feature film last year, and the brains of the Mystery, Inc. outfit, Velma, just nabbed her own spin off show. Why not dig deep and reintroduce us to other cartoon favorites?

Tom and Jerry make their case for relevance with a live action/animation hybrid by director Tim Story (Ride Along, Barbershop). The film sees the squabbling cat and mouse team relocating to New York City, where Tom hopes (presumably – he doesn’t talk so it’s hard to say definitely) to become a musician.

Jerry just wants to keep being a jerk.

Is it me, or is Jerry really the villain in this twosome?

They run afoul of Kayla (Chloe Grace Moretz, who needs to fire her agent because she should definitely be getting better movies than this).

Kayla requires a new job after some insane, hand-drawn cat knocks her off her bike, ruining her delivery. She cons her way onto a hotel staff. Now if she can just prove that she is good enough and keep the guests’ (Pallavi Sharda and Colin Jost) wedding-of-the-century on the rails, she’ll be fine.

Or will there be animated chaos?

Trying to make old school ‘toons fresh and interesting for a modern audience does not always work. Even Scoob from 2020 was a miss, but Tom and Jerry’s failure to entertain lands closer to the colossal disappointment of Garfield (a film so bad Bill Murray apologized for it in a death scene in an entirely different movie).

The animation sequences are hand drawn, so that’s a great change of pace from the lifeless CGI churned out in films like Earwig and the Witch. Too bad Story doesn’t know how to blend them with live action in a way that feels at all engaging.

T&J is long. The story, by Brigsby Bear writer Kevin Costello, is over-stuffed and under-enjoyable. He mistakes idiocy for lunacy, busy for kinetic. A lot happens, none of it interesting, none of it funny, all of it surrounded by a bombastic soundtrack. Surprisingly little of the adventure really has to do with the ‘toons, either.

There are long stretches of Kayla learning valuable lessons and Michael Peña affecting some kind of unplaceably bizarre accent.

When your funniest joke is about scooping animated dog poop, no one is enjoying themselves.