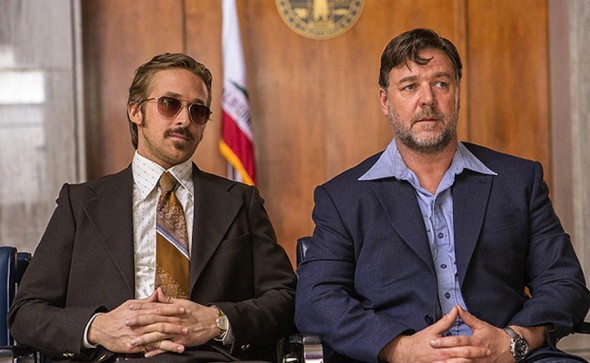 Tell me you’ve seen any of the countless trailers for Shane Black’s new action comedy The Nice Guys. Funny! I haven’t had such high expectations for a new film yet this year.

Ever since Black announced his presence with authority, penning ‘87’s iconic buddy cop action flick Lethal Weapon, he’s been one to watch. Kiss Kiss Bang Bang, his directorial debut, suggested he might even be keeping his best stuff for himself. But after a while, his tics and tendencies grow tiresome.

The Long Kiss Goodnight, anyone?

And though his newest effort absolutely revisits most of the filmmaker’s by-now obvious predilections, his craftsmanship and casting have never been better.

Hey girl, guess what – Ryan Gosling is a hoot! No, no, I didn’t say he’s hot (as that goes without saying). He’s a hoot. And if you found his scene-stealing performance in last year’s gem The Big Short a refreshing and joyous change of pace for the award-bedecked actor, you will surely enjoy this masterpiece of comic timing and physicality.

Aah, 1977 – when everybody smoked, ogled women, and found alcoholism a laugh riot. Black puts this time machine quality to excellent use in a film that would have felt stale and rote during his Eighties heyday, but today it serves as an endlessly entertaining riff on all that was so wrong and so right about the Seventies.

A brightly lit (if smog-choked) Southern California noir-turned-buddy-action comedy, The Nice Guys does a surprisingly good job at finding its tone. All the lurid, twisty plot fodder could easily weigh the film down in gritty drama, but Shane’s heart is in the budding, unsanitized bromance.

Gosling’s impeccable hilarity is custom-made for Black’s machine gun fire dialog, but Crowe also manages to get comfortable in the script, allowing both the conversation and action to breathe and take shape. The pair’s chemistry is a joy to watch, and is aided immeasurably by Angourie Rice’s flinty, intelligent turn as March’s disappointed daughter, Holly.

Ultimately, the twists and surprises don’t amount to much. The Nice Guys is a shiny Shane Black toy that begs to be played with now, even if it’s forgotten later. Kind of like the Seventies.

← Fright Club: Coming of Age Horror
Fight for Your Right →
Scroll Up