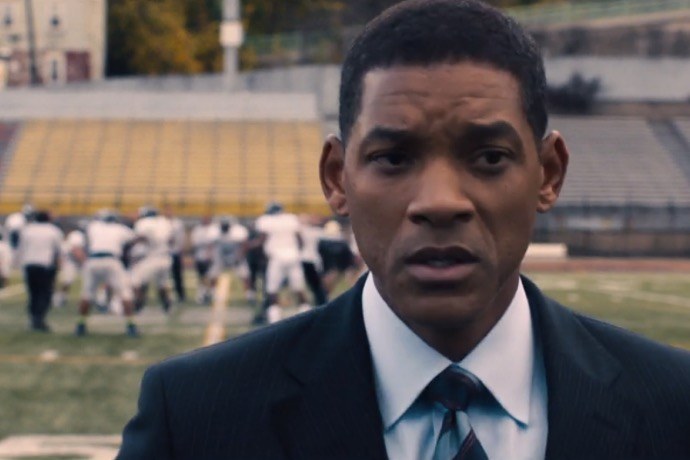 “The NFL owns a day of the week. It’s the same day the Church used to own. Now it’s theirs.”

That’s one of the best lines in Concussion, made even better because it’s not only a blunt reminder of how much America loves football, but a de facto admission that the film’s message may be modern day sacrilege.

Will Smith stars as Dr. Bennet Omalu, the Nigerian-born brain specialist who, while working in the hallowed gridiron ground of Pittsburgh, first identified CTE, the deadly brain disease afflicting former football players. He’s also the man who just recently proposed a ban on the sport for anyone under the age of 18.

Writer/director Peter Landesman seems more confident in driving home the dangers of football’s controlled violence than in turning Dr. Omalu’s story into a consistently compelling narrative. Highlights of ESPN’s old “Jacked Up!” segment roll in the background as Dr. Omalu demonstrates how the brain reacts to collision, describing one effect akin to “pouring wet concrete down kitchen pipes.”

These punches land, but then the film can’t decide if it wants to be 60 Minutes, Forensic Files or All the President’s Men.

More precisely, it tries to be all of them, exhibiting the same scattered focus that plagued Landesman’s script for Kill the Messenger, another true tale of a crusader under fire for his unpopular discovery. With Landesman also in the director’s chair this time, the reins are even looser, most damagingly in the one-note depiction of Omalu.

Smith delivers a committed, thoughtful performance that may be the best of his career, but he is hamstrung with a script that gives his character zero layers that aren’t heroic. Support from Alec Baldwin as Omalu’s colleague Dr. Julian Bailes, and Gugu Mbatha-Raw as Omalu’s wife, is similarly underplayed. Only Albert Brooks, in a scene-stealing turn as the head of Omalu’s pathology department, finds some moments that break convention.

Concussion carries an understandable sense of quiet outrage, but muddles its own case with cliches and curious wrinkles in the game plan. There’s a gripping movie in here somewhere, and no doubt the Church of the NFL is happy it wasn’t found.