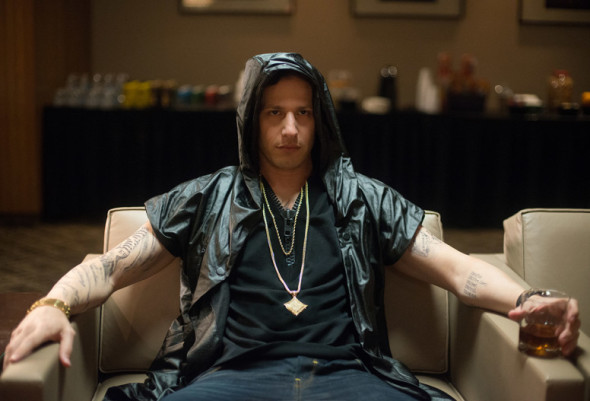 I admit it, I’ve laughed at The Lonely Island videos. “I’m On a Boat?” “Captain Jack Sparrow” with Michael Bolton? “I Just Had Sex?” All funny. “Dick in a Box?” Classic. Even the cover of their Turtleneck and Chain album is chuckle-worthy.

The nice thing about those projects is they all last about three minutes or less. With Popstar, Andy Samberg and his best buds (Akiva Schaffer, Jorma Taccone) have feature length ambitions, but only prove that even a slight 86 minutes is excessive.

Samberg stars as Conner4Real, the worldwide pop sensation who hit it big in the Style Boyz with childhood buddies Owen (Taccone) and Lawrence (Schaffer), only to leave them behind when solo stardom came calling. After a smash debut album, Conner’s plans for an encore shape Popstar‘s mockumentary approach to lampooning the absurdity of today’s pop music scene.

The irony, of course, is the very level of that actual absurdity makes parody even more difficult.

Will Ferrell and Zach Galifianakis had the same problem poking fun at the idiocy of political pandering in The Campaign, and The Lonely Island boys (who both write and direct) can’t find a satisfying thread to connect all their new tunes. There are some hits here, such as “Equal Rights (I’m Not Gay),” an overtly sexual love song called “Bin Laden” and “Incredible Thoughts (featuring the return of Bolton),” but the project feels too much like a soundtrack in search of a movie.

Or, more pointedly, a series of SNL skits dreaming of the multiplex. In that vein, there are guest stars and cameos galore, including Will Arnett leading a priceless sendup of the obnoxious TMZ “newsroom.”

Any music scene mockumentary is bound to live in the shadow of This Is Spinal Tap, and The Lonely Island does acknowledge that challenge with a couple winking homages. But the laughs are rarely sustained and never go to 11 (sorry), and Popstar becomes a fairly forgettable tune.