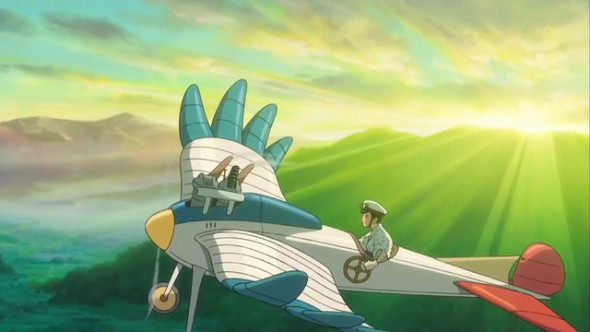 A body of work like his – Spirited Away, My Neighbor Totoro, Ponyo, Princess Mononoke and so many more – deserves a unique capstone, and The Wind Rises is certainly unique. This film is not only unlike anything else Miyazaki has crafted, but unlike anything else period.

Set in Japan in the early 1920s, the film offers a fictionalized account of a nearsighted boy who dreams – literally – of aircraft. In Jiro’s dreams, Italian aeronautical pioneer Gianni Caproni enlightens the boy to the elegant, creative possibilities of airplanes. Unable to become a pilot because of his eyesight, Jiro determines to design planes.

Like everything Miyazaki does, Wind is a visual glory. Whether crowded city streets, mountainside locales, or cloud-speckled heavens, the scenery in this film is breathtaking. Touching, intimate moments and catastrophic acts of God or of war, Miyazaki treats them with the same poetic brushstroke.

The subject matter here proves more adult than his previous efforts, though, and he limits the fantastical elements because of it. Though the dream sequences are a joy, don’t expect to find unusual creatures or outright feats of magic in this one.

Rather, Miyazaki attends to some of Japan’s most epic historic moments, contextualized behind the journey of one quiet, delicate young man’s voyage through life. The result is less giddily entertaining than what you might expect from the filmmaker, but no less captivating.

Still, the thematically bold effort lacks the whimsy that has marked every other film Miyazaki has released. It’s an odd sendoff for the master, an artistic mind unlike any other, who leaves behind a legacy of the most beguiling fantasies any artist could hope to create.

Maybe we can hope for just one more?