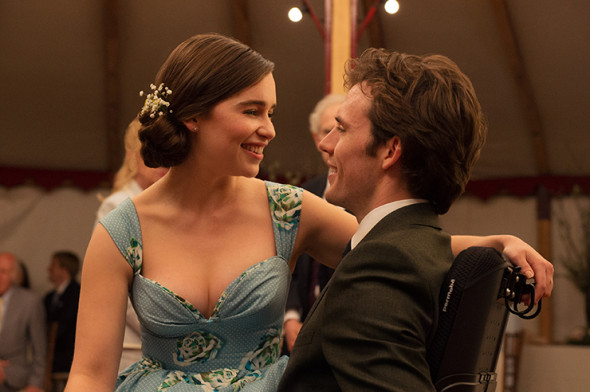 A textbook tear jerker/romance that somehow manages to miss both of those targets, Me Before You is a pretty, brightly lit, well-meaning effort that lacks courage.

Adapting her own best-selling novel, Jojo Moyes offers director Thea Sherrock’s feature debut a warm story lacking chemistry and hard edges. Lou (Emilia Clarke) – a working girl from a small British town – takes a job as companion to recent quadriplegic Will Traynor (Sam Claflin). Once a wealthy, live-life-on-the-edge playboy, Will now haunts a wing of his parents’ castle. For real. They live in the castle that looms in the background of Lou’s small town.

Not that unemployed waitress Lou is intimidated! Not with all that pluck and salt-of-the-earthiness! And it turns out, all it takes to melt Will Traynor’s cold, cold heart is a wildly mismatched yet huggably bold outfit and some dimples.

Once Lou realizes that Will intends to end his life in a Swiss “death with dignity” clinic in six months, she determines to make his last hours on earth amazing and, thereby, change his mind.

Good for Moyes and Sherrock for addressing a difficult issue. Too bad they treat the end of life question the same way they treat Will’s suffering, his medical needs, and every other messy element in the film – which is to say, they keep it offscreen.

Clarke is an effortless charmer, so it’s unfortunate she keeps her beguiling wackiness dialed up to 11. Attractive and easy to watch as they are, she and Claflin have next to no onscreen chemistry. That particular problem is symptomatic of a film that feels inauthentic – though likeable – throughout.

Blandly inoffensive and colorful are not the kind of adjectives you use to describe a tear jerking romance that stays with you. Me Before You warms an icy heart before succumbing to terminal adorableness.