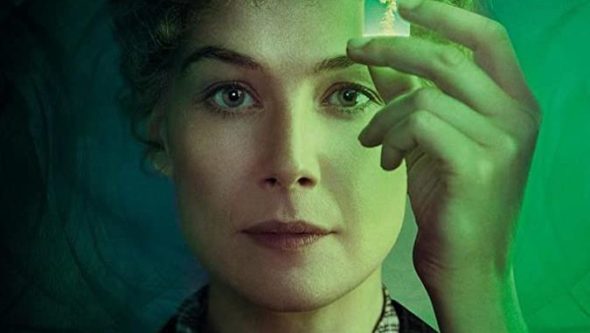 Honestly, I’m not digging this title, yet it somehow fits.

For the story of an intellectual giant, Radioactive seems too easy, too cheesy, and a bit dismissive. Similarly, the film itself becomes a sum of often conflicting parts, flirting with greatness while chasing too many bad pitches.

Rosamund Pike stars as Marie Sklodowska Curie, the Warsaw-born scientist who became the first woman to win the Nobel Prize, the first person to win it again and the only person to win it in two different scientific fields. Her groundbreaking work in France with husband Pierre Curie identified two new elements (polonium and radium) and the theory of radioactivity itself, leading to world-changing advancements in medicine and, of course, warfare.

Director Marjane Satrapi (Persepolis, The Voices) seems intent on honoring Curie’s spirit via the most experimental film treatment she can get away with. Animated graphics attempt to illustrate Curie’s theories on atomic movement, while tones are jarringly shifted with futuristic vignettes that glimpse the more devastating consequences of radioactivity.

Too often, Satrapi is hamstrung by screenwriter Jack Thorne’s overly broad and simplified adaptation of Lauren Redniss’s source book, which is itself a work of original art, photographs, graphics and text. Bringing such hybrid energy to the screen demands a unified vision from writer and director, but Satrapi and Thorne seem at odds whenever they try to expand their scope.

Pike is the unifier here, with an instantly engaging and fully formed portrait of a genius understandably ferocious about defending her work from being usurped or dismissed by male colleagues. Pike humanizes Curie with a mix of defiance and insecurity, frank sexuality and a fierce commitment to husband Pierre (Sam Riley, in a thoughtfully understated and effective turn).

The third act addition of Anya-Taylor Joy as the Curie’s eldest daughter Irene (who would also win a Nobel Prize in Chemistry) only cements the film as being most resonant when it is the most personal.

And it can’t go unnoticed that in these science-denying times, Curie’s story is a needed reminder of the importance of pursuing knowledge, of research and researchers.

Curie was one for ages. Radioactive does suffer from scattered elements, but ultimately turns in watchable, satisfying results.