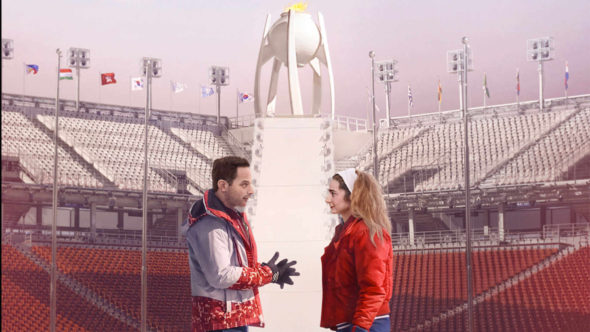 You have to admire the chutzpah when the first feature film ever to shoot on location at the Olympics has the star athlete’s event be over immediately after the opening ceremony.

But it’s an anticlimax that sets the tone for the rest of Olympic Dreams. Cross-country skier Penelope (real-life Olympian Alexi Pappas) is at a crossroads in her life. Young in years but already worn out in a world that measures time in all-consuming four-year spans, she spends the rest of her time at the Olympic Village wandering around, talking to fellow athletes and delaying the inevitable return to reality when she has to go back home.

She meets volunteer dentist Ezra (Nick Kroll, foreshadowing an effective mid-career transition to these reined in dramedy roles), an outgoing Olympics nerd who’s just happy to be there.

The two hit it off, united by a vague sense of longing for… well, something. It’s a movie with modest aims, which are often dwarfed by the impressive settings. The story (by Pappas and Kroll along with Jeremy Teicher, who also directs) feels like it came long after securing the PyeongChang Olympic Village as the setting.

There’s the barest of plots, a sort of fish-out-of-water romcom that plays like a mumblecore Lost In Translation. As endearing as the two leads are, there’s not a lot of scaffolding to help them out. The film relies less on subtle characterization and more on a safe bet that you’ve seen these particulars enough to fill in the blanks yourself.

It’s a shame because Kroll and Pappas excel in their elements. Between Kroll’s deadpan improv with the various athletes and Pappas’ sincere empathy for the sacrifice and emotional highs and lows constantly unfolding in the background, it’s a wonder the filmmakers didn’t play it straight as a documentary.

The film has plenty of warm moments, with Pappas especially managing to balance a range of heartbreak, uncertainty and charm in a way that doesn’t get to come through in the official behind-the-scenes featurettes during the Olympics.

There’s just not enough there to back her up. The film might take us to the finish line, but just barely.

← Late Shift
Death by a Thousand Papercuts →
Scroll Up