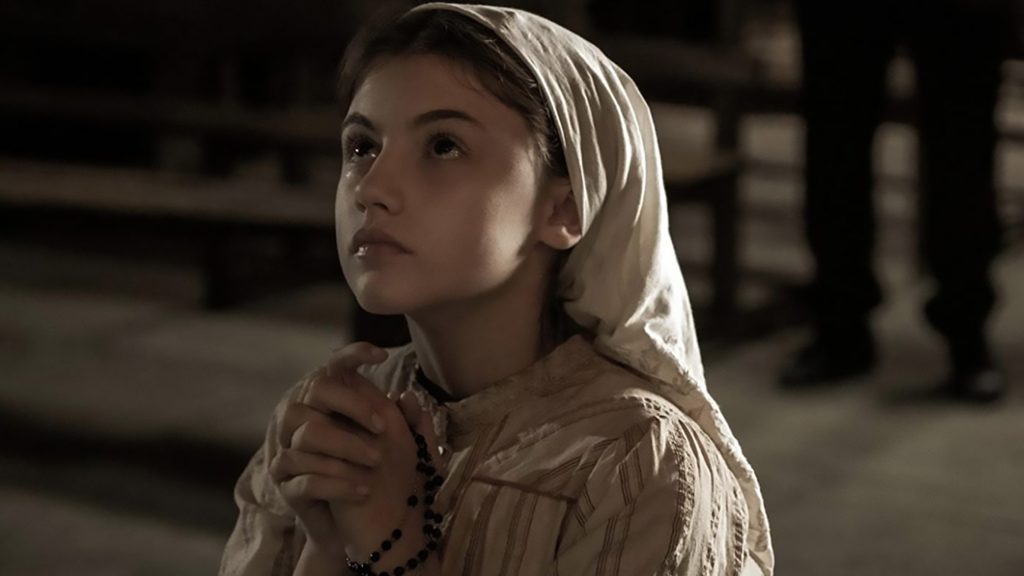 In 1917, in the midst of World War I, ten-year-old Lucia (Stephanie Gil) has a vision of the Virgin Mary. Along with her two young cousins, Lucia is asked by the Virgin to return to the same spot every month to pray for peace. When word of this vision spreads, people from all over flock to the small village of Fatima, Portugal to receive the message each month from the Virgin.

Perhaps unsurprisingly, there is a lot of conflict in a film about a miracle. Young Lucia faces skepticism from those around her. The local mayor (Goran Visnjic) is man of science and fears the influence of a young girl on the religious population. The area priest doubts her. Even Lucia’s mother (Lúcia Moniz), a humble believer, thinks her daughter is lying. Why would the Virgin Mary bestow this message on Lucia?

It’s a question posed to the adult Lucia (Sonia Braga), a nun, when a professor (Harvey Keitel) visits her at her convent to ask about the events of 1917. A nonbeliever, Professor Nichols listens to the story as Sister Lucia relives it. The audience is privy to the conversations between Professor Nichols and Sister Lucia, as well as the Sister’s reminiscence on the past.

The film is primarily concerned with the events of 1917. The few moments between Sister Lucia and Professor Nichols are shallow question-and-answer sessions in which neither convinces the other of their position.

This is a movie for believers, to reward their devotion with a “faithful” portrayal of the events in Fatima. There is some neat imagery during some of Lucia’s visions, but most of the moments are unbelievably cheesy.

Pontecorvo’s effort is a messy, one-dimensional film. Characters, particularly the nonbelievers, are stereotypes portrayed in the simplest terms. Lucia’s family members pop in and out of the film at convenient moments to voice concern or disbelief. It’s unclear how many sisters Lucia has. If their names are given in the film, it doesn’t really matter since they don’t really matter.

Though Lucia’s cousins are also witness to the Virgin, they’re not interrogated the same way as Lucia who, for some unexplained reason, is the instigator.

Strong acting, particularly from Lúcia Moniz, keeps the movie watchable, but it’s not enough to save it from poor writing.

I don’t doubt this latest retelling of the “Miracle of Fatima” will be held in high regard by many, even though, at best, it’s a mediocre movie.