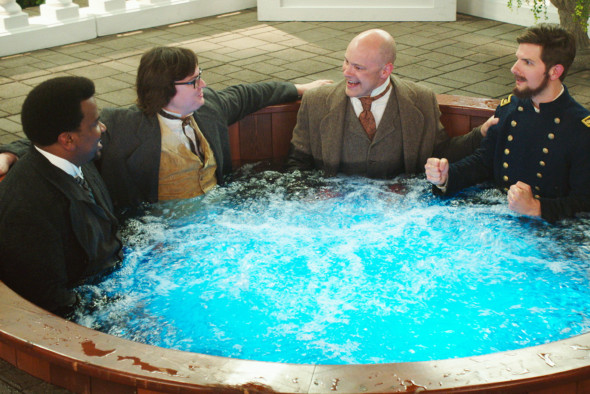 Lou (Rob Corddry) turned his miserable life around at that ski resort in 2010/1986. Or not. Turns out, Lou is still a big problem in that he’s a toxic asshole, so someone shoots him and it’s up to his remaining friends (Craig Robinson, Clark Duke – John Cusack is noticeably, wisely absent) to fire up the hot tub and stop the murder before it happens.

The fact that the hot tub sends them to the future hardly matters in this lazily scripted semen joke of a film.

Gone entirely, along with Cusack, are the charm and good nature of the original, the light heartedness that offset the darker edges and made the toilet humor and sex jokes almost endearing. It was a nostalgiafest, complete with “I want my two dollars!” shouted at John Cusack from a ski slope. Priceless.

With no such built in fondness for 2025, and Corddry in the lead, the sequel is just a smattering of self-referential gags held together with homophobia and misogyny.

Corddry is a magnificent, unseemly talent, but he’s not a lead. With Lou in the center of the film, rather than the charming, curmudgeonly everyman of Cusack, the movie substitutes an anchor for flailing misanthropy. That’s hard to build on.

The lack of a lead is one of the film’s larger concerns. Corddry, returning time-tripper Craig Robinson, and new 4th wheel Adam Scott are all comic talents, but also all side characters.

With Steve Pink returning to direct another script from Josh Heald, you might think lightning could strike twice, right? No. Let’s be honest, no one thought this film would be any good. We’re all still stunned that the lightweight goofiness of the original was as entertaining as it was. Who knows how that worked, but whatever ingenious, low-brow magic put Crispin Glover (two arms or one) at that ski lodge, it’s missing from the sequel.

← A Pretty Fun Neighborhood
Running Down a Dream →
Scroll Up