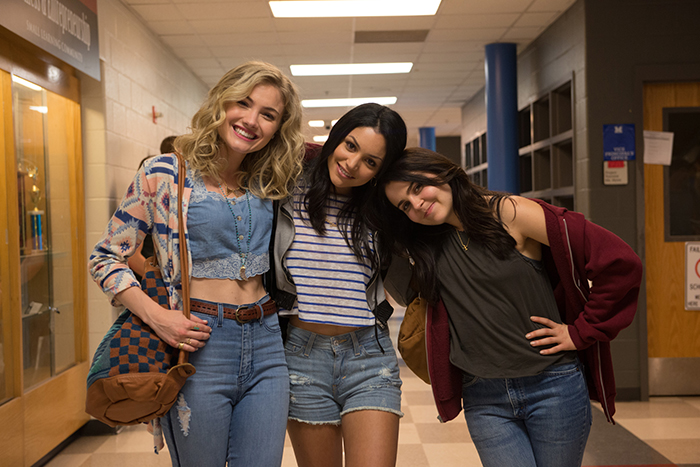 The DUFF may not be the best teen movie ever made, but after the string of If I Stay‘s and Fault in Our Stars‘s the last few years, it feels like Citizen Kane. Characters, humor, smarts, acting…what a nice change.

It’s based on a “young adult” novel by Kody Keplinger and centers on Bianca (Mae Whitman) a high school senior who is aghast to learn she is known in social circles as a DUFF – the Designated Ugly Fat Friend. Ouch. Even though she is assured the label doesn’t mean she’s ugly and/or fat – just the one people use to get to her hotter, more popular friends – Bianca feels some changes are in order.

First, she breaks up with her longtime besties, then turns to her neighbor Wesley (Robbie Amell) – who just happens to be the football captain and a certified Mr. Popular – for advice on how to shed her DUFFness and catch the eye of her big crush, Toby.

So, yes, it’s a white suburban makeover movie with an outcome that’s never in doubt, but The DUFF is saved by winning performances and a confident self- awareness that trusts its audience enough to aim higher than YA melodramatic angst.

Josh A. Cagan’s script serves up all the teen movie staples, but does so with a lovable wink that never becomes outright parody, while it also manages to touch on some serious issues (cyber-bullying, hurtful stereotypes) with an amusing subtly. Even the overused devices of narration and lessons-I’ve-learned essay writing don’t seem quite so tired here.

Whitman (one of the few bright spots in The Perks of Being a Wallflower) is a treat, and she carries the film with a winning performance that shows a real flair for comic timing. Amell (TV’s The Tomorrow People and The Flash) is just as good, creating a genuine chemistry with Whitman that is perfectly endearing. Rather than the one-note fawning hot boy and the girl with hidden specialness, The DUFF gives us main characters that seem human, and both Whitman and Amell take advantage.

Okay, so maybe it does dip a toe in sentimental waters once or twice, but The DUFF has enough going for it to make it a breezy charmer. And I didn’t even mention the great Alison Janney as Bianca’s mom!

2 thoughts on “A Pretty Fun Neighborhood”