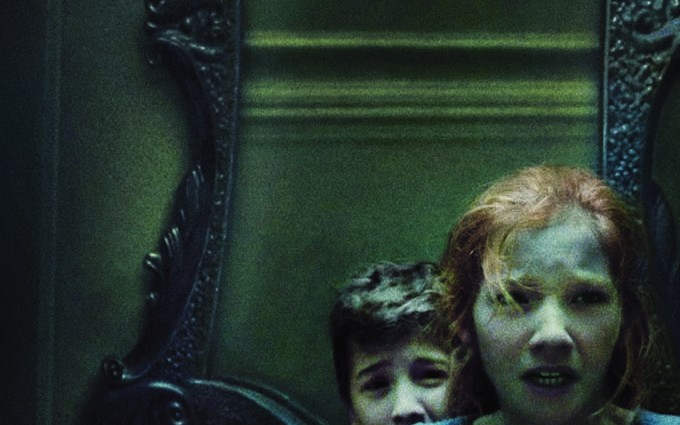 Back in 2011, writer/director Mike Flanagan unleashed the impressive nightmare Absentia, a film that cost him just $70,000 to make. Creepy, memorable and extremely well crafted given the budget, the film suggested an artist who deserved a chance with some real money.

Armed with the genre cred from that film, as well as the story from his well-received short, Flanagan embarked on his first wide-release horror film, Oculus.

His new effort follows a pair of siblings looking to prove that their childhood family horror was actually the fault of a cursed mirror.

Flanagan braids present day events and flashbacks effectively, not just to illustrate the ghastly deeds of the siblings’ youth, but to emphasize the growing madness of the brother and sister as they revisit the scene of the crime and set about proving their theory.

He has better luck with the performances of the youngsters in the cast than their present-day counterparts. Ten-year-old Kaylie Russell (played with convincing spunk by Annalise Basso) and her little brother Tim (Garrett Ryan) survived a family meltdown of Overlook Hotel proportions. While Tim’s spent his formative years institutionalized and learning to accept a more logical version of the events, Kaylie bounced around foster homes doing research and plotting to clear her family name, prove her version of the story, and break that damn mirror.

The pouty Karen Gillan (Dr.Who) offers more insincere bravado than spunk as the adult version of the determined sister, while Brenton Thwaites’s newly-released Tim has as much charisma as a tuna sandwich. For this reason, the flashback sequences hold more attention than the modern-day plans to undo the evil.

Plus, terrorized children are just more scary than whining adults.

Flanagan has some real skill weaving the rational world with one full of madness, and he knows when to rely on FX and when to be craftier with his scares. Unfortunately, his pacing is frustratingly slow, which makes his climax feel like a bit of a cheat. It’s hard not to compare his work with others of similar themes – The Shining, for example – and in that company, Oculus falls quite short.