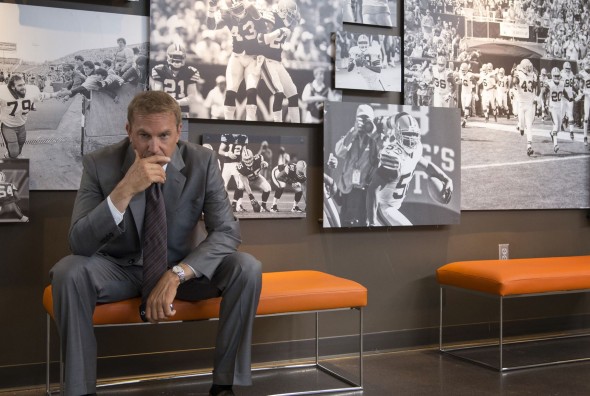 Don’t tell Cleveland sports fans that a movie released 25 years ago this week didn’t help turn one of their hapless losers into a championship contender.

Major League hit in 1989, and before long, the Indians were winning.

Draft Day won’t make anybody’s list of great sports movies, but if it propels the Browns toward the Super Bowl, a lifetime achievement Oscar would surely be in order.

The focus is just what the title promises:  the day of the NFL draft. And though the film was originally conceived for the Buffalo Bills organization, the more budget-friendly environment in the Dawg Pound put Cleveland on the clock.

Kevin Costner plays Sonny Weaver, Jr., the Browns GM who wakes up on draft day with some issues.

Though he doesn’t hold the first pick, Sonny is getting pressured by his owner (Frank Langella) to trade up and make a splash by landing the new hot quarterback prospect. Not only is Sonny unsure the Browns need a QB (pause for laughter), but his somewhat secret relationship with Ali, the team’s salary cap expert (Jennifer Garner), has hit a critical point.

In their feature debut, screenwriters Scott Rothman and Rajiv Joseph try to mix Jerry McGuire‘s sports biz love story with Moneyball‘s profile of a maverick GM. They aim high, but just can’t provide enough reason for us to care much about the couple, or about anyone else we meet.

Current players and prospective draft picks are given contrived back stories, while Sonny’s own history of trying to live up to a family legacy becomes laborious. Ditto the manufactured friction between Sonny and his head coach (Denis Leary).

Costner, as in all his sports movies, looks right at home, though Garner seems a bit lost and Leary resembles a football coach as much as Bill Belichick does a standup comedian.

Draft Day arrives with the blessing of the NFL, but that can be a double-edged sword. It certainly looks authentic, with enough logos and famous faces to sometimes resemble a “sorry about that moving your team thing” love letter to Browns fans. Heck, even some fake Ohio State game footage is impressive.

But you also get plenty of sponsor product placement and a brand- friendly message that puts executive deal-making in the same league as a late game touchdown drive.Director Ivan Reitman proves a worthy choice for the task at hand:  keep things snappy and polished, but forget about digging any deeper than a highlight reel.

The draft is now a major pop culture event, as a football-starved nation eagerly accepts anything resembling NFL entertainment and asks for more.

Draft Day will fit right in.