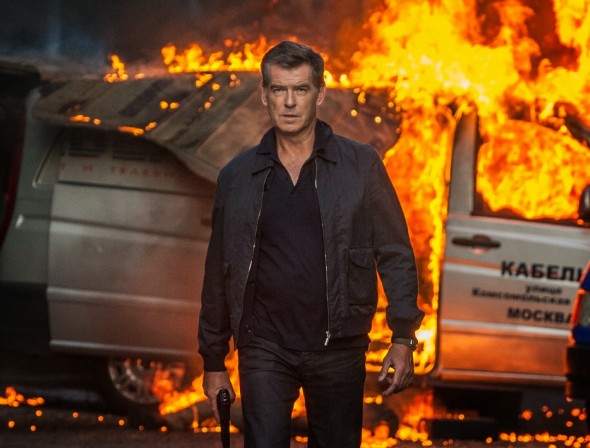 Somehow, it’s easy to lower your expectations in August, and a film that would seem stale and dated in, say, May or even November, can feel almost like a relief. The November Man is one of those movies.

Its lack of digital wizardry – relying, as it does, on old fashioned practical effects – feels like a welcome respite from the summer’s FX bombast. And though this agent-thinks-he’s-out-but-gets-pulled-back-in tale brings very little new to the table, at least it isn’t If I Stay. Or Sin City 2. Or Teenage Mutant Ninja Turtles. Oh, August.

At first blush, the film appears to be a James Bond rip off, right down to the lead and his lady (Pierce Brosnan and Quantum of Solace Bond Girl Olga Kurylenko). But this film casts off any interest in smooth, sly espionage, gadgetry, one-liners and one night stands in favor of something a little more brutish.

Brosnan’s ex CIA op retires not long after an incident with a trainee he deems unfit for service. But when a colleague needs a favor and pulls him back in for one last gig…well, when does that ever go as planned? Next thing you know, he’s trying to figure out what went wrong with his op while he plays cat and mouse with that old trainee, now a trained CIA sniper with bigger ambitions.

Brosnan’s grizzled charm buoys the effort, even when he’s pursing his lips like a school marm at his former trainee (a mostly serviceable Luke Bracey). The film falters most in its dual purposes: mentor/mentee cat and mouse versus international conspiracy leading to a puppet Russian president with a pension for under aged war refugees.

The truth is, neither side is especially compelling on its own, and when the two blur together, things feel just silly.

Still, The November Man isn’t bad. It’s no Skyfall – the new high water mark for spy movies – but it’s no Jack Ryan: Shadow Recruit, either. Remember that one? From January of this year? Yeah, January is another one of those bad movie months. At least in August the bad movies don’t come with snow.