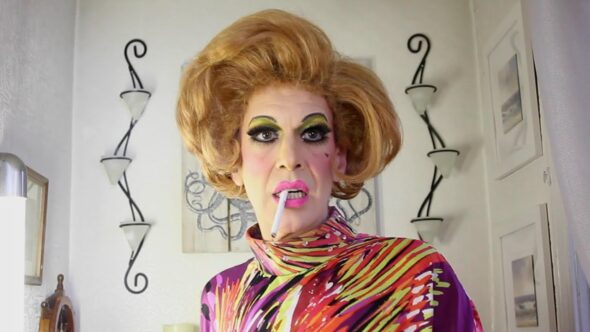 Don’t let the low-budget look of Death Drop Gorgeous deter you from watching this film because if you do, you’ll miss out on a hilarious, campy slasher film.

Recently dumped, Dwayne (Wayne Gonsalves) has returned to Providence and begged back his old job as a bartender at The Aut Haus. Rooming with best friend, Brian (Christopher Dalpe), Dwayne comes back to work just as a serial killer begins hunting the queens and patrons of The Aut Haus. Using the dating app, Poundr, the killer lures his victims to their doom.

Populated by drag queens and serious shade, this movie sends up some of the best of 80’s camp horror. Writers, directors and stars Dalpe, Michael J. Ahern and Brandon Perras manage a lot with a low budget. By doing double and triple duty with their cast and crew, they mine every bit of talent they can from what they have available.

That’s not to say the film doesn’t have its distractions. The camerawork and lighting are occasionally poor. However, there are also times when it perfectly sets the tone. Some of the actors, most of whom have no previous acting experience, are better than others. Michael McAdam is perfectly cast as gloriously named Gloria Hole, a queen who no longer commands the respect she used to. McAdam plays perfectly against younger, hotter queen Janet Fitness (Matthew Pidge). Their nasty back and forth offers some of the film’s stand-out moments.

A few scenes toward the beginning of the film are a bit longer than necessary. But the pace picks up in the second act as more and more people are dispatched in gruesome ways. You’ll probably never look at a meat grinder the same again.

Social commentary is delivered via catty banter and barroom brawls. The culture surrounding Dwayne and Brian is quick to deride certain qualities. One man goes so far as to say Brian is “too fem” and that he doesn’t date “blacks” in reference to Dwayne. Gloria Hole is shamed simply for aging. This is deeper content than one might expect from a campy slasher flick, but it works.

The writers and the actors camp it up for all its worth, and it makes Death Drop Gorgeous a cut above many films benefiting from a bigger budget.

Subscribe in a reader
← Come On and Zoom!
Ghosted →
Scroll Up