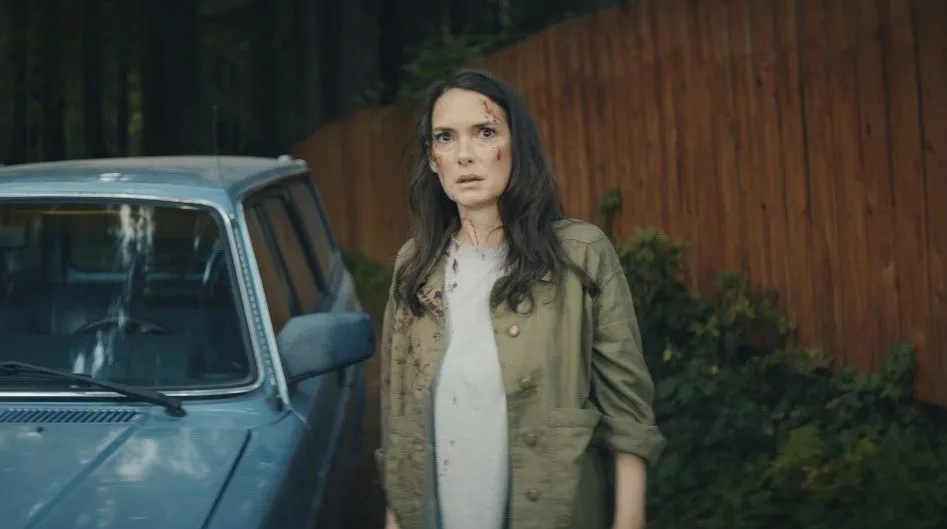 Gone in the Night

Winona Ryder was arguably the queen of the late 80s/early 90s when it came to counter-culture or oddball movies. Beetlejuice, Heathers, Edward Scissorhands, and Bram Stoker’s Dracula are all either bonafide classics or have become cult favorites in their own right. While the 2000s weren’t as kind to Ryder, her career came roaring back with the massive success of Stranger Things.

With Gone in the Night, Ryder makes her way back to the big screen in a film that might not make the same lasting impression as her earlier movies.

Kath (Ryder) and her boyfriend, Max (John Gallagher Jr. of 10 Cloverfield Lane and Hush) drive deep into the woods for a relaxing cabin getaway. Upon arrival, the two find that another couple, Greta (Brianne Tiu of Amazon’s I Know What You Did Last Summer) and Al (Owen Teague of It: Chapter One and It: Chapter Two) have already moved in for the weekend.

After some tense back and forth, it’s decided that Kath and Max will stay for the night before heading home. After a night of board games, and light flirting, Kath turns in first. In the morning, Kath finds that both Max and Greta have disappeared. A seemingly distraught Al claims to have caught them hooking up during the night. As Kath tries to figure out why Max abruptly left, flashbacks begin to piece this muddled tale together.

Director Eli Horowitz weaves a clever mystery that patiently moves through the past and present. The film’s climax isn’t dependent on opening a satisfying mystery box. No, it’s more about how the film tries to subvert expectations along the way – and not always to a rewarding conclusion.

There’s an attempt to comment on mismatched partners in relationships with Kath and Max. These two couldn’t be further from the same page when it comes to what they want out of a relationship or what they want out of life. Even holding a conversation feels like a chore for them. The link between this theme and where the film eventually ends up is murky and never really comes together succinctly.

The mix in tone is where Gone in the Night stumbles most explicitly. The film’s original title The Cow, telegraphs a much more subversive film than the neo-noirish thriller the new title hints at. The third act twist would be much more satisfying had the lead-up not been as sardonic. Even the character motivations feel tacked on and convoluted.

The cast handles the material much better than expected – although most of them feel adrift due to the tonal inconsistencies.

Ryder delivers a solid bedrock performance as the in-the-dark (pun fully intended) partner. It’s nice to see her as the lead in features again, and the actor continues to show that she never lost the capability to command the screen.

Gallagher Jr. offers another variation of the “bearded slacker” he’s been doing for the last five years. Despite the repetition, Gallagher is good at what he does. The standout is the always dependable Dermot Mulroney (My Best Friend’s Wedding, Copycat). Mulroney brings his on-point, affable charm, but also infuses the performance with a hint of darkness to keep the audience on its toes.

Gone in the Night is a thriller that tries to offer up something new in a tried and true genre. Unfortunately, new doesn’t always mean good.