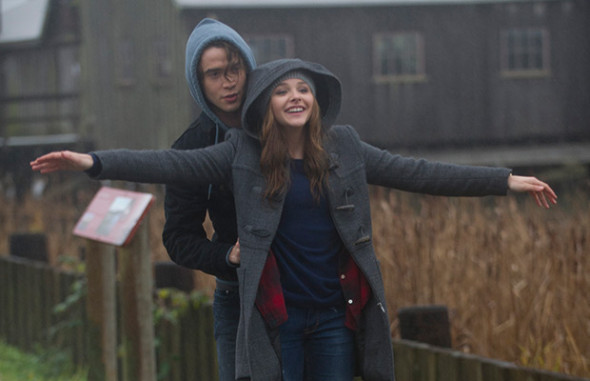 Is it just for the cash, or do the people behind these teen romance fantasies actually believe they are being profound?

The latest, If I Stay, starts with a teenager saying “you know how when you meet someone, and they just, already are the person they’re meant to be?”

Excuse me but no, I don’t, because that’s nothing close to reality, it’s a line of melodramatic crap written by an adult for a teenage audience they know will lap it up and feel like this movie really “gets them.”

The same formula was seen just weeks ago in The Fault in Our Stars, and If I Stay, also adapted from a popular young adult novel, is only too happy to follow it.

The latest teen girl who doesn’t fit in is Mia (Chloe Grace Moretz). She’s got hip, rockin’ parents, but Mia prefers classical cello, and feels awkward about her talent.

If only there were someone who could make Mia realize how special she’s been all along?

This time his name is Adam (Jamie Blackley), and he’s the supercool Senior who already fronts a popular local rock band. After one casual glance at Mia practicing, Adam is smitten and confidently proclaims “You can’t hide in the rehearsal room forever…I see you.”

He sees her! Oh happy day! Now her specialness can be revealed!

The added emotional manipulation…,er, I mean plot twist.. comes in the form of a car accident that puts Mia in a coma. As she leaves her physical body and watches family and friends react to the tragedy, Mia is able to reflect on her young life and decide if she wants to stay in this world.

Director R.J. Cutler and writer Shauna Cross can’t bring one ounce of authenticity to their film. Everything feels fake – from Adam’s band to Mia’s family to the hospital staff – and sadly, that includes Moretz. Though she has often shown real talent, here she plays down to the material with a completely uninspired performance.

The young adult audience is more than just tomorrow’s Nicholas Sparks fans, but you wouldn’t know it from what plays at the multiplex. Too often, those movies teach boys to trivialize adolescence and teach girls to wallow in its drama. Meanwhile, more honest films such as It felt Like Love and Palo Alto struggle to get noticed.

Yeah, yeah, that’s Hollywood feeding the cash cow. I know it, but I don’t have to like it….or the maddening mess of a movie that is If I Stay.