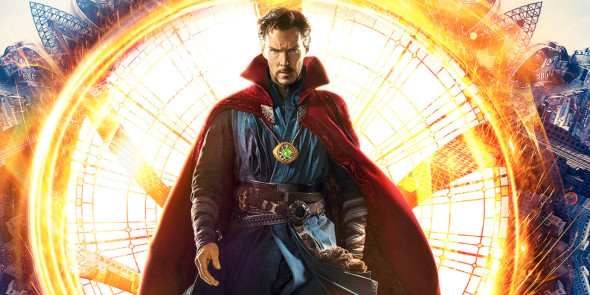 What if I told you…the Chosen One didn’t take the blue pill or the red pill, he took the brown acid, and things got mighty trippy?

Alternate realities, a school for sorcery, supernatural powers hiding seductive dark sides. We’ve seen these themes before, but Doctor Strange presents them with such eye-popping, mind-bending style, the Marvel Comics Universe has a brand new A-lister.

This is one that absolutely rewards the investment in a 3D/IMAX viewing, but beyond all the technical wizardry, the film’s superpower is refreshingly human – a cast with the talent to make elevating some cheesy dialog seem effortless.

Equal parts Jobs and Hawking, Dr. Stephen Strange (Benedict Cumberbatch) is a brilliant neurosurgeon stuck in a broken body from a nasty car crash. When medical science can’t restore the dexterity of his hands to operating room standards, he abandons a potential love (Rachel McAdams) to seek out mystical healing in Nepal, finding himself under the tutelage of The Ancient One (Tilda Swinton) and Master Mordo (Chiwetel Ejiofor).

The doctor studies hard and acquires sweet new astral skills – including levitation, Holmes – when a dormant cloak grants him the power of flight and Strange’s place as a new Master is assured. Just in time, too, as the evil Kaecilius (Mads Mikkelson, earning more gold stars for the casting director) and his followers are closing in on a plan to unleash the Dark Dimension and achieve immortality.

Director/co-writer Scott Derrickson (Sinister, Deliver Us from Evil) makes spellbinding use of the spectacular visual effects and, despite early moments in Strange’s transformation that seem a tad rushed, settles into a steady pace that renders this origin story one of the MCU’s most satisfying. Similarly, the script is able to balance a flirtation with excess and unsure transitions with some commendably meatier issues, such as grappling with the question of “when moral bills come due.”

But seriously, those visuals.

Go with the glasses and the biggest screen you can conjure up.