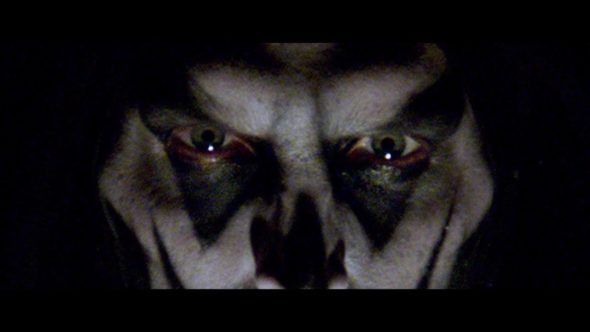 Lussier co-writes and directs Trick, a new horror show about an unstoppable, maybe even supernatural serial killer who comes back to Smalltown, America on Halloween to kill teens.

Hang on, isn’t that the basic plot of the Halloween franchise?

It is! But wait, there’s more! This loner wearing face paint appeals to the disenfranchised of the world, creating an online following that’s almost dangerous in its obsessive behavior. Who knows what his influence might make them do…

Correct! But this guy has a cool knife that says TRICK on one side and TREAT on the other side.

Yeah…that’s kind of cool…So if the knife comes up TRICK, he kills you, right? What if it comes up TREAT?

He still kills you. There’s no additional purpose to the knife. But stay with me, here! A beautiful, studious young woman who’s devoted to her invalid dad survived the first attack and now “Trick” Weaver may be coming back to claim her for his next victim!

Oh, come on! That’s every single slasher sequel. Ever! And this isn’t even a sequel—that’s just lazy. Does Trick bring anything new to the table? Offer anything provocative? Are the kills at least interesting?

Did I tell you about his cool knife?

Lussier (Drive Angry, My Bloody Valentine) cobbles a movie together from pieces of at least four different Halloween films plus a Scream vibe (even poaching two franchise actors, Omar Epps and Jamie Kennedy). His film would feel desperate to be socially relevant if it were not so incredibly lazy in just every conceivable way.

I was looking forward to a treat. Trick is like that time my babysitter said she was giving me a Tootsie Roll and it was really beef jerky.

That totally happened, by the way. I’m still mad.

Subscribe in a reader
← Killer Queen
Say My Name →
Scroll Up