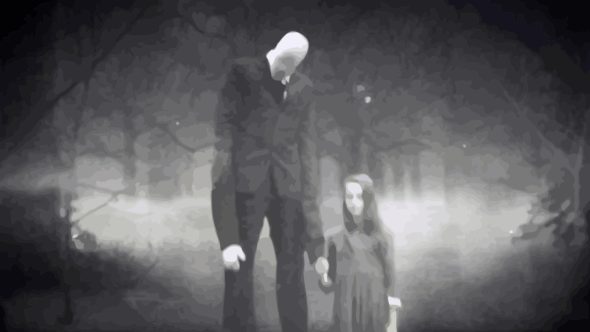 It’s the end of the summer! Quick, what lackluster genre trash can we tidy up with a PG-13 rating to cash in on kids’ free time before they have to go back to school next week?!

That’s the theme for this week at the movies, a period in which a 70-foot prehistoric shark movie contains no blood-not one drop. Also, a super creepy, tall, faceless but nattily clad monster terrorizes teens.

I love a good villain, and this film has an opportunity. Slender Man is a cool character. Born online in a meme contest in 2009, the elongated, pale, bald and faceless man in a black suit who beckons children was immediately embraced by a horror community who apparently has no idea what to do with him.

Do you know why bad things happen? Because kids today aren’t shown the classics, like The Ring. That movie knew how to maneuver a PG-13 rating.

So, the supernatural being haunts the woods. Or your phone. He’s electrical, you see. So, the woods. No, wait…

And therein lies the problem. We have a villain, born a meme. He has no real backstory, but he’s cool and he deserves a proper horror show. Screenwriter David Birke was absolutely not up to the task of creating that story. And even if he had done a proper job of it, White can’t manage to move scene to scene with any sense of dread or even narrative logic.

Boxes are checked with zero thought about why. Is there a scene in a library where one character stumbles upon some important background information? Why, yes, although it doesn’t make sense and leads nowhere.

Is there another scene of googling where a previous victim turns out to be in an asylum? Indeed! And again, this goes nowhere. Do they find her? Do they visit the asylum? Is she ever brought up again? Nope.

More than anything, Slender Man is just boring. And he shouldn’t be.