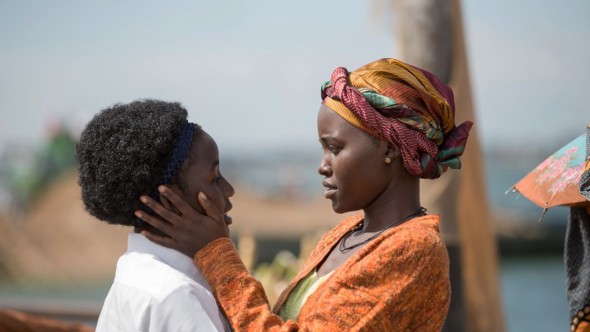 Director Mira Nair has a long history of films told with respect to the cultural heritage of the story itself. Having begun her career as a documentarian, she also builds in an eye for authenticity that can be sorely lacking in underdog sports films – which, on its surface, does describe Queen of Katwe. In fact, those genre trappings tend to be the film’s only major flaws.

Nair periodically stumbles over her formula. Particularly effected are the talented David Oyelowo. As Phiona’s chess coach, Oyelowo’s lot is to be the comprehensively honorable, selfless mentor with little to do besides look heavenward as he worries over his students with the unflagging encouragement of his by-the-playbook supportive wife (Esther Tebendeke).

But fear not, because Lupita Nyong’o sets the screen ablaze with a performance that reminds us just why she won that Oscar. As Phiona’s mother, she depicts a survivor’s stubborn strength that belies deep, heartbreaking emotion. She’s magnificent.

Making her screen debut, Nalwanga also impresses, surrounded by a talented ensemble of young actors. The large, often loud group around her makes great use of dialog, argument and physicality, but Nalwanga expresses an enormous range of emotion with the slightest change in expression. Hers is a quietly memorable performance that easily carries the film.

There were so many ways this movie could have gone wrong. You can almost see it being told from the point of view of the white, American journalist Tim Crothers researching the tale and learning valuable lessons from the tenacity and noble sacrifice of its heroin. Thank God, this is not that movie.

Crothers’s book (based on his Sports Illustrated article) was adapted for the screen by William Wheeler. Wheeler penned Nair’s weakest feature, 2012’s The Reluctant Fundamentalist, using exactly that “white reporter learning from a subject of color” framework that is so, so tired. So tired.

While he – and by extension, Nair – can’t quite break free from “inspiring sports film” clichés, those weaknesses are easily eclipsed by a set of magnetic actors and a true story that cannot help but move you.