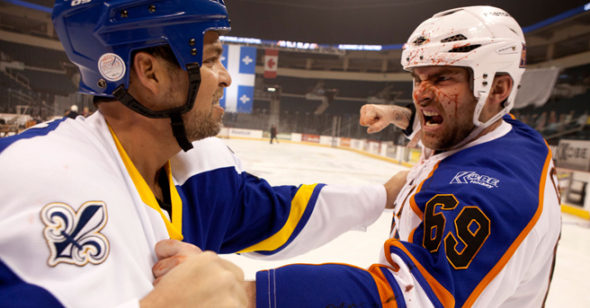 Seven years ago, we got three successive blasts of fresh air released in roughly 18 months: Kick-Ass, Machete and Goon. Sequels for the first two quickly followed, each doomed by an approach that seemed oblivious to all that made their origin stories so appealing.

It’s taken quite a bit longer, but Goon: Last of the Enforcers is here to complete the unfortunate trifecta.

Lovable hockey goon/overall simpleton Doug Glatt (Seann William Scott) is touched to be named captain of his Halifax Highlanders squad, but when he’s beaten to a bloody mess by new goon on the block Anders Cain (Wyatt Russell), Doug faces some tough decisions.

His girl Eva (Alison Pill) is pregnant and really doesn’t want him fighting anymore, so Doug takes a sad gig handling “insurance documents.” But with his team in disarray and a familiar itch to scratch, Doug starts training with old foe Ross Rhea (Liev Schrieber) for a possible return to the ice.

Familiar sports movie cliches follow, but that’s not what makes this new Goon so disappointing. The problems come from forgetting to give us any authentic reasons to care about Doug, or any attempts at humor that rise above sophomoric.

Jay Baruchel returns as co-star/co-writer, and takes the big chair for his debut as a feature director. His vision falls well short of the bawdy bulls-eye the first film delivered, sorely missing the script input from original co-writer Evan Goldberg (Pineapple Express, This Is the End, Sausage Party, Superbad). Goldberg’s smart brand of humor is just what this film needs more of, as it relies instead on silly gags aiming for the lowest hanging fruit.

Also gone is the goon so easy to love. Doug is much too broadly drawn this time, reduced from a big-hearted brute we rooted for to a village idiot merely there to laugh at, not laugh with.

Goon was an underdog winner. Last of the Enforcers earns the penalty box.