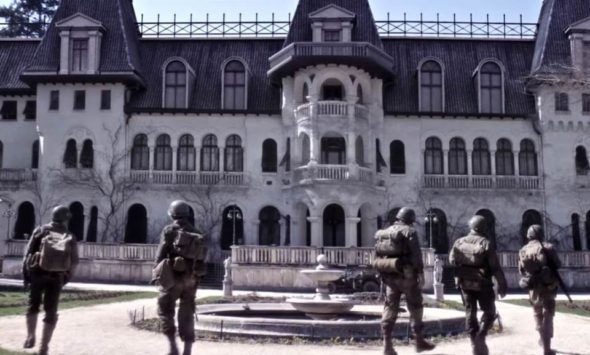 Here’s the thing about horror movies in 2020: they have to one up 2020. This year itself is such a horror show, it’s hard for cinema to keep up.

Writer/director Eric Bress (The Butterfly Effect) does what he can with the supernatural war tale, Ghosts of War.

Five WWII soldiers are ordered to hold tight in a French mansion circa 1944. It’s an isolated estate, once a Nazi stronghold. Terrible things happened there, and even though the surroundings suggest luxury, the mission may be the most dangerous the platoon has ever faced.

It reminds me of that time earlier this year when COVID trapped a Bolivian orchestra inside a haunted German castle surrounded by wolves.

So the film has that to compete with. Of course, the other thing Ghosts of War has going against it is the surprisingly engaging and unfortunately underseen Overlord, a WWII horror show that drops us alongside a handful of soldiers into war torn France just in time to find zombies.

But Bress isn’t interested in zombies. Instead, he explores the madness that weighs on men who’ve done the unthinkable by trapping them in a situation where they must face their demons.

Kyle Gallner delivers an appropriately haunted performance as one of the soldiers—each of whom Bress characterizes with quick, shorthand ideas: the nut job (Gallner), the smartypants (Pitch Perfect’s Skylar Astin), the hero (Theo Rossi), the big talker (Alan Ritchson), the leader who’s in over his head (Brenton Thwaites).

Gallner and Astin are the only cast members given the opportunity to differentiate themselves from the pack as the platoon stumbles upon evidence of the haunting. Bress and his ensemble stumble here, rarely developing any real dread, infrequently even delivering the jumps their quick cut scares attempt.

Ghosts of War makes an effort to say something meaningful. That message is waylaid by confused second act plotting and a third act reveal that feels far more lurid and opportunistic than it does resonant or haunting.

Bress tries to take advantage of the audience’s preconceived notions in order to subvert expectations, but he doesn’t have as much to say as he thinks.