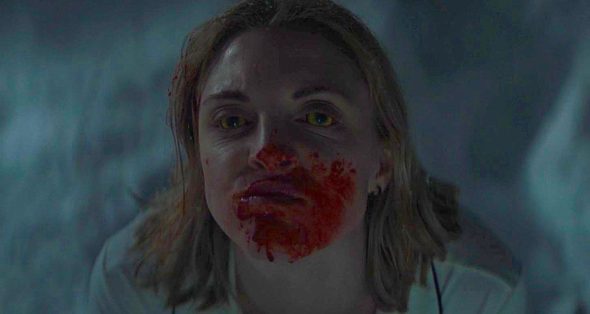 For a while, less can be more in a monster movie (i.e. Jaws). Still, diving into a werewolf flick without the budget for showy CGI or well-crafted practicals is ambitious.

While Dog Soldiers proved you can make an impression without breaking the bank, so much of werewolf lore is about transformation – both the literal and the metaphorical – that as much as one layer falters, the other needs to stand that much stronger.

Unfortunately, Bloodthirsty is shaky on both grounds.

Pop singer Grey (Lauren Beatty) became a sensation with her first album, and now she’s feeling the pressure to produce a blockbuster follow-up. Grey is plagued by nightmarish hallucinations about turning into an animal, so her doctor (Michael Ironside in a distracting cameo) has upped her meds.

Plans for the second album look brighter when famed producer Vaughn Daniels (Greg Byrk) agrees to helm the project. He invites Grey and her girlfriend Charlie (Katherine King So) to stay at his lavish home/studio in the Canadian wilderness while they record, but Charlie is concerned about Vaughn’s unsavory past.

Grey isn’t, but things get weird as soon as Vaughn’s creepy housekeeper (Judith Buchan) shows the ladies to their room. Music isn’t the only reason Vaughn volunteered to work with Grey, and director Amelia Moses (Bleed With Me, which also starred Beatty) attempts a tone of Gothic seduction as the mystery unfolds.

But it’s not really much of a mystery. The script, from Wendy Hill-Tout and her daughter Lowell (who also contributes original songs) delivers pale imitations of the carnivorous temptations in Raw as their film builds to a reveal that is less than shocking.

Bloodthirsty is a werewolf film that never really feels like one, which has both up and down sides.

Ditching the focus on full moons for a lesbian artist at a creative crossroads has promise, but the characters lack the depth required for any effective metaphor to take root. Pair that with scant transformation scenes which impress more with sound than vision, and a horror fan’s thirst for blood will likely be left wanting.