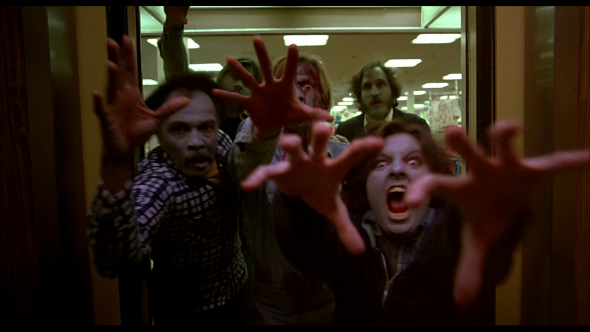 Today we salute a man whose career teems with ideas that have been both universal and wildly ahead of their time. There may be no horror filmmaker who’s had more of an influence on his genre than George Romero, whose political leanings and social commentary have given his inventive monster movies the relevance to stand the test of time. A great line, an original idea, and a fantastic pair of glasses – George A. Romero has it all. Here are our five favorites:

By the early Eighties, Romero – who’d basically created the zombie genre – was ready to tackle something slightly different. For Creepshow he teamed up with another genre godfather, Stephen King, who wrote the screenplay (most of which was adapted from his own short stories) and even co-starred.

A series of shorts pulled from the pages of a disgruntled boy’s comic book, Creepshow boasts the wicked humor, juvenile preoccupations and inclination toward comeuppance that mark scary comics. Linked, short form horror had certainly been done previously, but Romero brought a visual sense of the artistry and an affection for the mean-spirited humor that most other films lacked.

He also had a hell of a cast, with appearances by genre favorites Tom Atkins and Adrienne Barbeau as well as King and heavy hitters from outside horror Ed Harris, Ted Danson, Leslie Nielsen and Hal Holbrook.

They lend a bit of class to some fairly bloodthirsty pieces that find a dim-witted farmer covered in alien foliage, a disabused husband taking advantage of a newly found monster-in-a-box, a cuckolded husband whose revenge plot takes a supernatural turn, plus bugs! Loads of them!

In ’73, Romero used a lot of the same themes from his zombie masterpiece – a genre he’d more or less just created himself – but changed the beast slightly. When military blunder leads to a chemical weapon mishap in a small Pennsylvania town, infected inhabitants go insane. You still end up with a mindless horde capable of anything as well as the fear of contamination, but the fun difference is the unpredictability.

The premise is so ripe: people infected go hopelessly mad. Every version of madness is different. How does each victim behave? Romero didn’t mine this often enough because for him, the real terror was in the government’s behavior. Still, his most provocative ideas here tend to be invested in the varying madness.

Other familiar themes arise as well. Military incompetence, the needless horror of Vietnam, and the evil that men can do when ordered to do so are all central conceits in this film. Indeed, Romero seemed more interested in social commentary than in horror this time around, but once again, his ideas were ahead of their time.

Or are those memories? Does Martin’s uncle hate him because Martin, as he claims, is really in his Eighties, as his uncle would surely know? Romero has fun balancing these ideas, tugging between twisted but sympathetic serial killer and twisted by sympathetic undead.

Romero returned to the land of the undead in ’78 with a full-color sequel to Night. Set in Philadelphia, at a news broadcast gone crazy, the film follows a news producer, her chopper pilot boyfriend, and two Philly SWAT cops ready to abandon the organized zombie fight and find peace elsewhere. The four board a helicopter, eventually landing on the roof of a mall, which they turn into their private hideaway.

Romero, make-up legend Tom Savini, and Italian horror director Dario Argento teamed up for the sequel. You feel Argento’s presence in the score and the vivid red of the gore.

Ken Foree and Scott Reiniger as the buddies from SWAT create the most effective moments, whether character-driven tension or zombie-driven action. Romero’s politics are on his sleeve with this one, and he seems to be working to build on successes of his original. He uses the “z” word, digs at Eighties consumerism, shows full-color entrails, and reminds us again that the undead may not be our biggest enemy once the zombie-tastrophe falls.

“The scene can best be described as mayhem.”

As the first film of its kind, the lasting impact of this picture on horror cinema is hard to overstate. Romero’s inventive imagination created the genre and the monster from the ground up.

Romero made a narrative choice that would mark the genre and certainly the filmmaker’s entire career: the mindless monsters outside are not the biggest problem. The shrill sense of confinement, the danger of one inmate turning on another, and the unthinkable transformation going on in the cellar build to a startling climax – one that utterly upends expectations – followed by the kind of absolutely genius ending that guarantees the film’s eternal position in the annals of horror cinema.