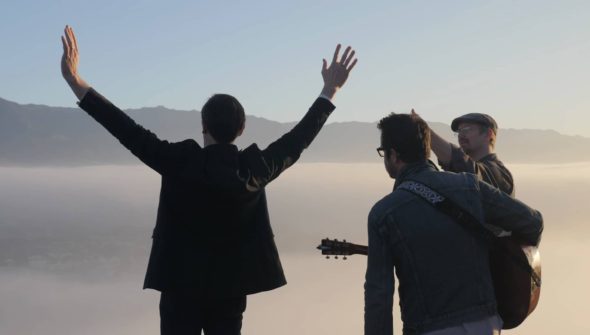 Is it karma? Kismet? Dumb luck?

Whatever it is, New York neighbors Richard (Rich Price) and Greg (writer/director Greg Naughton) are brought together by the fate of a fallen tree limb. Both are musicians, and after an eye-opening impromptu jam session they decide to throw caution to the wind.

Rich, a teacher and grad student, will blow off working on his dissertation, and the guys will take to the road. They’ll stop in Ohio to pick up Greg’s estranged girlfriend, then hit the Eagle Rock folk festival to play original tunes on one of the side stages.

So what are the odds weird hitchhiker Brian (Brain Chartrand) also plays guitar and can provide the missing voice for perfect three part harmony?

The guys sound great together, and they should, because they’re an actual group called the Sweet Remains. Taking inspiration from his real life, Naughton filmed his directorial debut over several years, shooting around the band’s touring schedule.

The result is a sweetly earnest and often funny ode to the simple joy of making music, and the value in even the most unlikely dreams.

So yeah, a fast-talking record exec (Richard Kind) hears the guys play and sets up an L.A. showcase, but give Naughton credit for adding plenty of unexpected, sometimes pretty clever speed bumps on the road to overnight success.

As actors, the three leads are all talented musicians, with just enough easygoing charm to get us rooting for their characters almost immediately. That’s a big help when those brand new songs sound polished on the first take, or when someone conveniently has an uncle who can get them out of the latest jam.

How much of Naughton’s art is imitating his life? Hard to say, but it hardly matters. In both cases, it took the guys some time to arrive, but now that they’re here, what remains is pretty sweet.