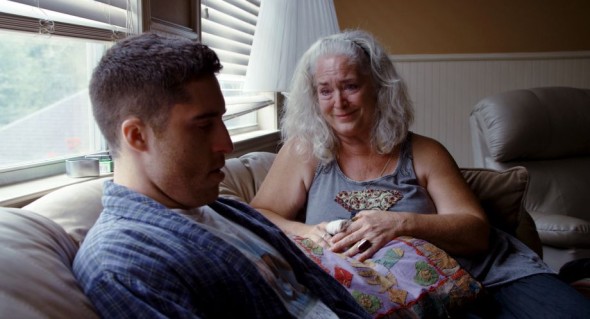 Krisha is not only a powerful character study awash in piercing intimacy, it is a stunning feature debut for Trey Edward Shults, a young writer/director with seemingly dizzying potential.

And then there’s the startling turn from Krisha Fairchild, Shults’s real-life Aunt, who after decades of scattershot film and voice work, delivers a jaw-dropping lead performance full of such raw authenticity you begin to feel you are treading where you don’t belong.

That’s no accident. Shultz draws heavily on his own painful family history to bring the story of Krisha (Fairchild), who is attending a big Thanksgiving dinner after 10 long years of estrangement from her loved ones. Slowly, we’re introduced to other family members (some also played by Shults’s relatives) and learn that Krisha is a recovering addict who has done some very bad things.

She’s come to make amends, and most importantly, to try and salvage any chance of a relationship with her son (played by Shults himself).

Expanding his own short film from 2014, Shults is remarkably assured in constructing his narrative. Nothing is spoon fed, rather we grasp what we know about Krisha and her family through guarded conversations and quiet, private moments. From the awkwardness of forced holiday small talk to the inevitable request for the “techy” relative to fix a computer, the scene is unmistakably real. Then, as old wounds become new, the film strikes with a humanity so deeply felt we expect to see our own faces in those family albums left out on the table.

The direction is equally graceful.  Calling to mind recent work from Cuaron and Inarritu, Shults gently leads his camera away from character activity to linger on the surroundings, just long enough to call to mind the part they play in Krisha’s fragile psyche.

It is all an artful complement to Fairchild’s intense, blistering portrait of a woman quite literally under the influence. From the truly unnerving opening shot through the next 82 minutes, taking our eyes off of her is nearly unthinkable.

Krisha is a timely reminder what undiscovered talents can achieve despite their limitations of budget, cast or location.