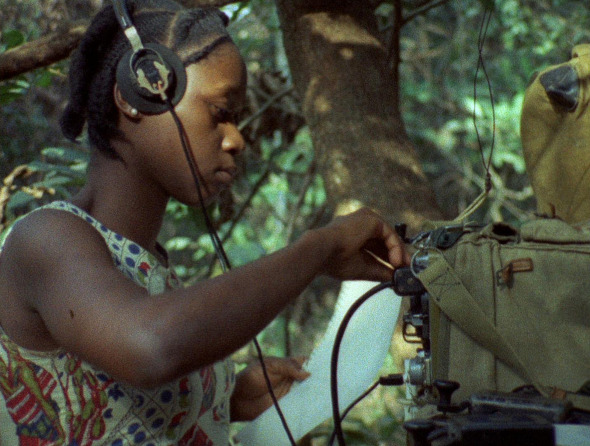 Concerning Violence – a remarkable documentary that looks at the global ramifications of Europe’s history of colonizing African nations – is not for the faint of heart or the slow witted. You may feel like you have to take notes. Director Goran Olsson (The Black Power Mixtape 1967-1975) challenges viewers with unadorned footage and undiluted narration, but for those who can tough it out, the film is as rewarding as it is upsetting (and theoretical).

Olsson’s handiwork can hardly be considered smooth or ornate. He has 9 clips to share (titled Nine Scenes from the Anti-Imperialistic Self-Defense) – news footage highlighting conflicts in Angola, Rhodesia, Liberia and other African nations burdened by colonization. He structures the pieces with onscreen type representing his thesis outline, then connects them with text from Frantz Fanon’s The Wretched of the Earth, a nonfiction work that has inspired anti-colonialist movements the world over. Don’t expect a soothing voiceover or talking head footage to help you fit together the pieces. Rather, expect images of revolution paired with quotes from a 1961 text and little else.

Often enough, Olsson makes the scrappy simplicity of his approach work well, giving the images onscreen the attention they deserve. The footage he’s chosen varies enough to offer a multidimensional image of the effects of colonization: the sense of entitlement in the colonizer; the generations-deep weight of oppression, poverty, limitation and powerlessness in the colonized; the frightening exhilaration in the struggle for independence; the inevitable bloodshed.

Fanon’s words are insightful, often lofty and theoretical, but frequently startling with unexpected, brutal turns of phrase that ensure you’re still paying attention. Olsson knows when to pepper in these more provocative remarks and Lauryn Hill’s narration beautifully underscores the points, whether idealistic or disturbing.

Still, Fanon’s words discount any evil in the inevitable violence of anti-colonialism, although we know that any act of coordinated violence draws true evil to it, and evil participates hand in hand with the noble. In this way, the film oversimplifies the struggle.

The film also fails to contextualize its subject in modern concerns, and that’s a major failing. Olsson rarely pulls punches in his film, yet he seems almost afraid to connect the dots to current political, economic and social conditions. He also starts the film off on weak footing with a bewildering preface that seeks to soften Fanon’s grim themes as it also throws a sideways glance toward the film’s omission of complicating gender politics.

Still, this is a big, big story. Concerning Violence is not meant to entertain, and as an informative look at the repercussions of colonialism, it’s an impressive piece containing certain images you won’t soon forget.