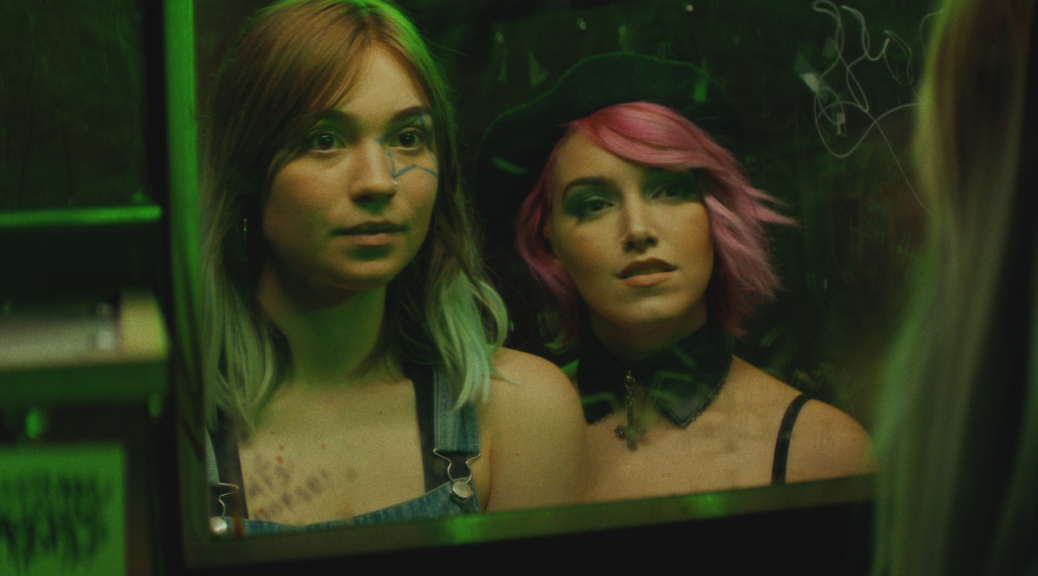 No matter how familiar the synopsis might sound to you, know for certain that Poser will surprise you.

Directors Noah Dixon and Ori Segev, working from Dixon’s script, drop you into the indie music scene you may never have realized existed in Columbus, Ohio. Lennon (Sylvie Mix) wants to change that with her podcast. She may not have a lot of listeners, but she promises those who do listen a deep dive into the scene, with interviews and performances from the best bands you’ve never heard of.

She’s kind of banking on that last bit, actually.

Mix’s open stare and stealthy movement — a technique she used to great effect in her haunted Christmas flick Double Walker — here feels slyly deceptive. Lennon’s an introvert, a fan, an artist herself. Or is she?

A clever opening in an art gallery sets wheels in motion, and you’re never quite sure how sympathetic Lennon really is. Mix masters pseudo-innocence, only betraying Lennon’s true nature in glimpses during meet-ups with her sister.

Lennon’s real purpose materializes with the introduction to idol/muse Bobbi Kitten, a rock star on the scene who is all that Lennon would like to become.

Like a cagey, pink-haired Jena Malone, Kitten commands the screen playing a version of herself. The singer from Columbus-based indie band Damn the Witch Siren, Kitten performs along with bandmate Z Wolf, whose presence adds a fascinating air of whimsy, danger and apathy.

Though Kitten and Mix are more than enough to keep your attention, the music scene and Columbus itself offer fascinating, pulsating ensemble support. The music for Poser, and the likely ad-libbed dialogue from band members, enliven every scene.

And Columbus looks terrific. Logan Floyd’s gorgeous cinematography meshes with performances and story to depict the melancholy and madness that go hand-in-hand with youth, art and punk rock.