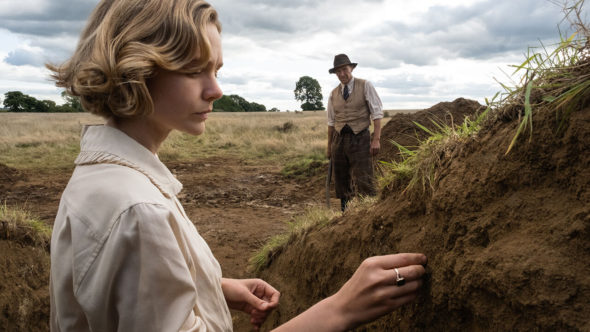 Back in 1938, as England sat on the precipice of WWII, an informally trained excavator named Basil Brown unearthed an ancient Saxon ship in a mound around back of the widowed Edith Pretty’s land. Journalist/novelist John Preston’s aunt Margaret Piggott was part of the larger archeological crew at Sutton Hoo that would mine the site for its cultural riches. Many years later, Preston would mine that story for a novel.

Refined and marked by the proper restraint of the English, Moira Buffini’s adaptation of the source material remains keenly interested in the difference between what we unearth and what we leave buried. Stone’s film shadows two romances and the emotions they choose to excavate as well as those they do not.

Brown and Pretty are played by Ralph Fiennes and Carey Mulligan, respectively. Fiennes finds a sweetly vulnerable center to Brown’s guarded stoicism. Meanwhile Mulligan reminds us again of her limitless range, playing essentially the opposite character of her bitingly brilliant Cassandra in Promising Young Woman.

Watching the gentle dance these two impressive talents engage in as their characters come to understand one another is hypnotic. There’s rarely an excuse to miss the opportunity to see either Mulligan or Fiennes act, and their delicate chemistry here is gorgeous.

Stone flavors his film and this relationship with notes of longing and melancholy that balance the overall theme of discovery. And then a sudden development—the arrival of Basil’s amiable and thoroughly loyal wife May (Monica Dolan, irresistible)—does more to sever their tale than complicate it.

This odd second act shift – just when we’ve really begun to invest in the primary relationship – turns Mulligan and Fiennes into supporting players in their own movie. Johnny Flynn and Lily James take it from here, he the attentive young RAF man in waiting and she the spunky archeologist/unsatisfied newlywed.

Both actors are solid, as is the entire and sizable ensemble of support, but the film feels out of sorts the moment the youngsters arrive.

It’s a lopsidedness The Dig never quite recovers from. Of course, had Mulligan and Fiennes not shone quite so brightly, it may not have been a problem at all.

Subscribe in a reader
← A Little Familiar
Shooting Stars →
Scroll Up