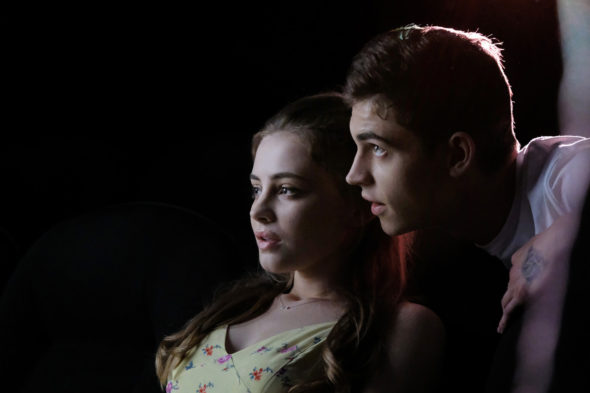 According to my crack research staff (i.e. the twentysomething woman who was nice enough to talk with me after the show), Anna Todd’s After source novels began as fan fiction for the band One Direction.

That actually makes some sense, as Fifty Shades began as Twilight fan fiction, After‘s playbook is Fifty Shades lite (Fifteen Shades?) and I guess this is what we do now.

The smoldering Hardin (Hero Fiennes Tiffin – Harry Potter’s Tom Riddle) is a college student who’s “complicated, be careful!” Incoming freshman Tessa (Josephine Langford, showing moments of potential) isn’t careful, and in an instant is trading in her high school boyfriend and Mennonite-ready frocks for Hardin and one of his multiple Ramones t-shirts.

We’ve all seen this before, and so has Todd, whose story (adapted by Susan McMartin) checks off all the obligatory boxes for what is less a cohesive narrative and more a series of daydreams connected by desperately sensitive pop songs not by the Ramones.

Director Jenny Gage, whose All This Panic mined genuine young adult emotion, is powerless to shape this material into anything more than plug-and-play emptiness.

So after the slo-mo bad boy glances, the disbelief in love, the emotional moment in the rain, the ex who assures her what she did to him was fine, the assurances that someone finally sees her specialness and more, we get to the voiceover essay reading.

Of course we do, and when that essay tells us how deeply one character’s life has been changed by the other, it means nothing unless we’ve been shown some reason, any reason, to believe it.