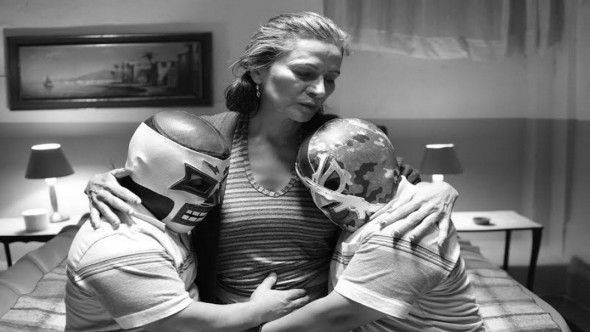 The veteran Mexican filmmaker works again with his regular collaborator and life partner, writer Paz Alicia Garciadiego. The two enlist the aid of cinematographer Alejandro Cantu to conjure an atmosphere that is simultaneously desolate and dreamy.

Filmed in stylized black and white and set in a maze of back alleys in Mexico City, Bleak Street begins with off-kilter vignettes that provide glimpses into the dreary lives of the film’s four primary figures before pulling the strands together to depict the true crime that inspired the effort.

Patricia Reyes Spindola and Nora Velasquez portray prostitutes facing the realities of their shelf lives as they watch younger women take over their corners and customers.

The two pairs have workplace struggles and disrespect in common, though this hardly binds them. While Ripstein never misses a chance to showcase the humanity of each of his characters, transcending their destiny is not his aim, nor theirs.

Ripstein adds to the hypnotic quality of his picture with a score consisting only of the nearly imperceptible sound of water as scenes fade to black.

Cantu’s lengthy, prowling shots underscore the voyeuristic feel of the film. His sparkling black and white fills the screen with brightly lit surfaces and shadowy backdrops, the landscape taking on a beautiful but nightmarish quality that suits the wild assortment of characters.

Regardless of their actions, these are not characters Ripstein judges. This is both refreshing and off-putting, because the film never feels like the tragedy it is.

Respectful but absolutely never preachy, Bleak Street holds itself and its audience at a distance from the characters onscreen. While that disconnect feels intentional, Ripstein missed an opportunity for lasting relevance because he doesn’t generate any kind of emotional connection with the tragic, true events unfolding.

Bleak Street screens this weekend only at the Wexner Center for the Arts.