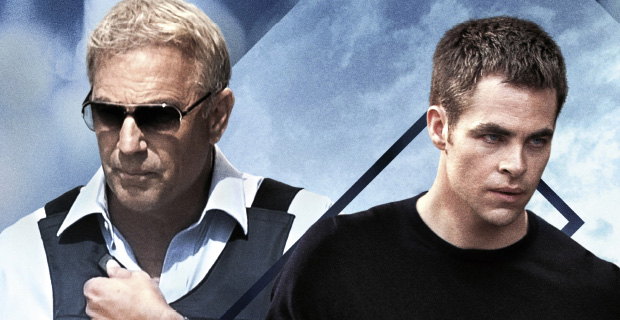 JJ Abrams can reboot a franchise – or at least, given the success of his Star Trek re-direct, that’s what Star Wars fans are hoping. But with Abrams tied up in galaxies far, far away, I guess when it came time to breathe new life into an old spy with Jack Ryan: Shadow Recruit, filmmakers went with the next best thing: Captain Kirk.

Yes, Chris Pine takes on the role filled by Alec Baldwin (The Hunt for Red October), Ben Affleck (The Sum of All Fears), and most lucratively, Harrison Ford (Patriot Games, Clear and Present Danger). The results are barely worth noting.

American Jack Ryan is working on his PhD in London when 9/11 changes his trajectory. He ditches school in favor of the Marine Corps, but heroism (“Ryan dragged then both to safety. With a broken back!!”) sends him to a hospital to rehab and be eyeballed by Kevin Costner.

It’s a clumsy, shorthand back story meant, I suppose, to illustrate Ryan’s brains, patriotism, heroism and resilience in one reel. Plus it introduces the love of his life (Keira Knightly). Oh, that Ryan is such a good man!

Costner’s a CIA operative with designs on Ryan. Next thing you know, Russia’s trying to collapse our economy and we need Ryan to discern the algorithm.

Good God, who greenlit that yawnfest of a storyline? If the big threat is a Russian algorithm, director Kenneth Branagh will need his A-game to keep this action thriller thrilling and action packed. Will he bring it?

Intrigue is an afterthought, tensions are kept to a minimum, and action sequences are few and far between.

Branagh pulls a bland double duty as director and baddie, playing the vodka pounding, assistant kicking, Knightly admiring Russian Viktor Cheverin. (It’s his algorithm.) Branagh can overact with the best of them, but his performance here is as colorless as Stoli on the rocks.

Pine, on the other hand, is charismatic. Costner proves to be a charming curmudgeon on occasion. Kiera Knightly is characteristically solid, but honestly, what is she doing in this film? Suddenly she has to take the role of the one-dimensional love interest to a second-rate action hero? When and why did that happen?

She deserves better than a toothless reboot. Maybe she should call Abrams. He might be looking for a new Leia.