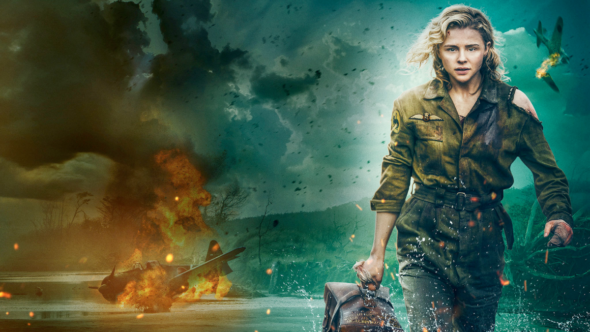 Shadow in the Cloud

Sometimes, you’re just in the mood for a B movie, especially if it’s a creature feature.

Extra points if it’s a feminist take on a misogynist’s story.

Shadow in the Clouds co-writer Max Landis has been accused of sexual misconduct and/or outright assault by eight different women. And while it’s tough to stomach any ticket purchase benefitting him, the truth is that co-writer/director Roseanne Liang’s film has stylized fun in depantsing exactly the kind of weak, entitled, insecure crybaby that makes you think of Max Landis.

The film tags along on a non-combat WWII military flight out of New Zealand. With seconds to spare, an unexpected female flight officer named Maude Garrett (Chloe Grace Moretz) boards the flight carrying a duffel bag with confidential contents.

The rowdy, boorish, some would say violently sexist crew quickly stashes Maude – sans duffel – in the gun turret until take off.

This is a brilliant move, cinematically. It creates immediate, palpable tension because she is locked into a tiny cell dangling from a moving airplane and dependent upon the good nature of the mainly bad natured men above.

It also allows Moretz and Liang the opportunity to introduce any number of terrifying elements out there in the clouds.

But mainly, it gives Moretz the chance to own the film for a while, and she does. Together filmmaker and lead slyly reveal more about Maude, ratcheting tensions and thrills as they do. Liang leans into budgetary constraints, developing a cheesy retro vibe while finding appealing ways to introduce different characters.

In many respects, the writing is the weakness. Too often scenes devolve into obvious but inauthentic ways to further the plot. Still, a lot tends to be forgivable in an openly, charmingly B movie.

If the style doesn’t engage you immediately, abandon all hope. The film builds on style, repaying your attention with increasingly insane action ending in a climax where one fight, one monster stands in for every belittling, dangerous, violent, controlling obstacle Maude has ever faced.

Shadow in the Cloud is a ludicrous, over-the-top action horror. It knows what it is and it delivers on its promises.