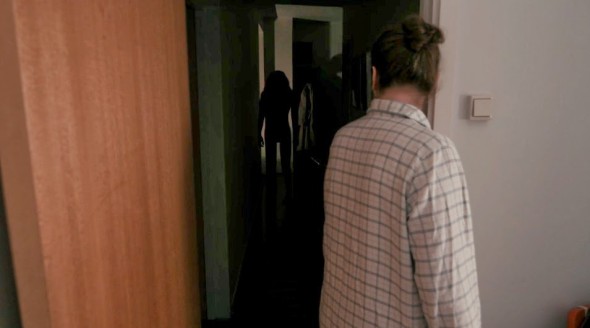 There aren’t many phobias more basic than a fear of the dark, and Director David F. Sandberg had nifty fun with it in his Lights Out short film from 2013. He gets a producer assist from James Wan (The Conjuring, Insidious) for his big screen debut, and though the opening segment does offer the same spark as that original short, expanding the premise to a mere 81 minutes brings more filler, less killer.

Young Martin (Gabriel Bateman) is increasingly scared to stay in his own house, since his mother (Maria Bello) talks to unseen beings and strange things happen whenever the lights go out. Martin’s older sister Rebecca (Teresa Palmer) is contacted by social services, and she’s instantly reminded of similar trauma from her own childhood. Rebecca sets out on a determined quest to finally uncover the truth about what’s hiding in the dark….which ends after opening the first storage box she sees.

Thanks for neatly organizing all this evidence, Mom! Now how do I get rid of it?

For those tired of all the love art house horror has been getting, Lights Out is your anti-Witch. It’s all about the jump scares, in a universe where major plot turns are explained by “something went wrong” and no one seems to have a job. Don’t think about it, just…boo!

It’s all obvious and mildly jolting, with none of the creepy polish evident in Wan’s own catalog. Sandberg does find some authenticity, though, in his cast. The reliable Bello is effectively sympathetic and Palmer, despite a string of lackluster performances, finally shows the promise of a genuine actor.

Though the bloodletting is always minimal in PG-13 horror, these films can still be effective. The Ring showed they can even be great, and screenwriter Eric Heisserer clearly agrees, which becomes increasingly evident as the structure of his backstory is revealed.

The finale is as abrupt as it is unsatisfying, and though Sandberg flashes chops worthy of a better script (he is directing Wan’s Annabelle 2 next year) Lights Out merely flickers.