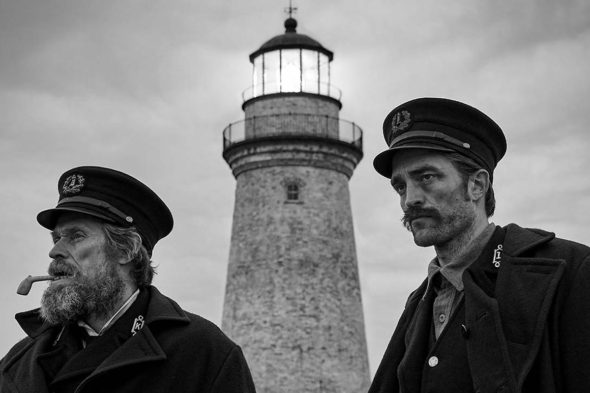 It’s easy to fall into the trap of believing that there are no new ideas in modern film, that everything coming out is a sequel, reboot, adaptation or biopic. And then you spend an hour and 49 minutes with two men and a lighthouse.

What did we just watch?

Director/co-writer Robert Eggers follows The Witch, his incandescent 2015 feature debut, with another painstakingly crafted, moody period piece. The Lighthouse strands you, along with two wickies, on the unforgiving island home of one lonely 1890s New England lighthouse.

Salty sea dog Thomas Wake (Willem Dafoe) keeps the light, mind ye. He also handles among the most impressive briny soliloquies delivered on screen in a lifetime. Joining him as second is one Ephraim Winslow (Robert Pattinson)—aimless, prone to self-abuse, disinclined to appreciate a man’s cooking.

Eggers’s film is a two-man show, a dizzying, sometimes absurd and often flatulent descent into madness.

Dafoe may be one of the few actors alive who can take this manic-eyed, gimpy-legged version of the Simpson’s sea captain and force us to absorb his every eccentricity. When Winslow finally screams “You’re a parody!” it both wounds and reassures, as by then we’re eager to accept any bit of confirmation that we can trust anything we’re seeing.

As our vessel into this waterlogged nightmare, Pattinson impresses with yet another fiercely committed performance. Winslow comes to “the rock” full of quiet dignity, only to become a soul increasingly tempted by mysterious new demons while running from old ones.

Winslow’s psychological spiral has so many WTF moments, it would crumble without the sympathetic anchor Pattinson provides from the film’s opening moments. Twilight seems like a lifetime ago, and in case you’ve missed any of the impressive indie credits he’s racked up the last few years, we’ll say it again: Pattinson is the real deal.

So is Eggers. His mastery of tone and atmosphere carries a weight that’s damn near palpable. The Lighthouse will leave you feeling cold, wet and woozy, as Eggers trades the literal payoff from The Witch for a series of reveals you’ll be struggling to connect.

And we’ll tell you what The Lighthouse is not. It is not a film ye will soon forget.