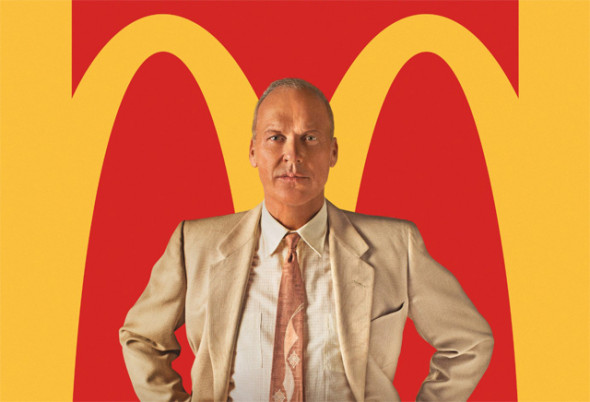 Two brothers, innovators in the food service industry, look on in despair as the sign is removed from above their beloved business. They no longer own their last name because, in Dick McDonald’s words, they “let a fox in the henhouse.”

That fox was Ray Kroc, and The Founder is director John Lee Hancock’s faithful dissection of how Kroc turned the McDonald brothers’ California burger stand into the worldwide behemoth that now feeds one percent of the global population every single day.

Michael Keaton is fantastic as Kroc, as he crafts an intensely driven man who listens to positive-thinking albums and becomes a living testament to the mantra of “persistence.” Dick and Mac McDonald (Nick Offerman and John Carroll Lynch, respectively – both terrific) had the business insight that was years ahead of its time, but Kroc had the vision, along with the fortitude and dog-eat-dog mentality to see that vision through. Keaton makes him a pathetically fascinating hero, possessed with winning at any cost.

So, an egocentric businessman with questionable ethics stops at nothing to attain a position of incredible wealth and power? Timely.

It is, and Hancock skips the opportunities in Robert Siegel’s script to give his film more teeth. Siegel also wrote Big Fan and The Wrestler, so he knows his way around finding the dark edges of the American dream. Though the rise of McDonalds is layered with very relevant threads (crass commercialism, innovation displacing employment, etc.), Hancock, per his resume (The Blind Side, Saving Mr. Banks) isn’t interested in exploring anything on that menu.

The Founder tells the story, and tells it in fine clinical fashion, but misses the chance to go big time.

Those McDonald boys can relate.