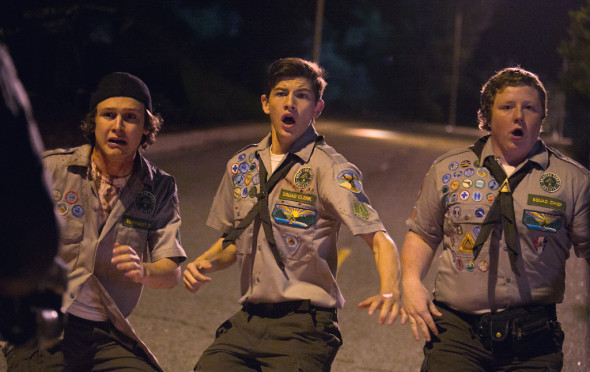 Scouts Guide to the Zombie Apocalypse

“Do you know what’s cooler than cool? Scouting!”

OK, maybe not, but Boy Scouts are exactly the people you need on your zombie survival team. Who doesn’t know that? They know how to tie knots properly, they can forage, find their way around in the woods, and they’re handy. They’re prepared. Duh.

Director Christopher Landon, working with a team of writers, puts this wickedly logical premise into action with his new horror comedy Scouts Guide to the Zombie Apocalypse.

The only three scouts left in Scout Leader Rogers’s (a characteristically wacky David Koechner) troop are at a crossroads. Augie (Joey Morgan) thinks scouting is the best. “Scouts forever!”

Carter (Logan Miller) wants to ditch the uniforms and badges before their high school reputations are ruined forever. “Junior year is the year all the girls become sluts!”

Ben (Tye Sheridan) is torn between both really convincing arguments.

And then zombies overrun the town and they’re glad 1) they weren’t invited to the super-secret cool kids’ party, and 2) they have mad scouting skills.

After a series of really impressive dramatic turns (The Tree of Life, Mud, Joe), Sheridan shoulders the lead in this coming-of-age comedy quite well. He’s a talented actor, able to fill out what could have been a one-dimensional good guy role.

Both Miller and Morgan fit the bill as the goofball sidekicks, while pros like Koechner and Cloris Leachman fill out the rank and putrid ensemble. (Not the actors – their characters.)

The film will win no feminism badges, but a story told from the point of view of three 15-year-old boys should probably be preoccupied with boobs and other assorted whatnot.

This is not a family film, though – make no mistake. This is definitely an R-rated movie, but for all its juvenile preoccupations and vulgar body horror, a childlike sweetness runs through it that keeps it forever fun to watch.

Says Augie upon entering a girl’s bedroom, “It smells like pixie stix and hope in here.”

Cleverly written, directed with a keen eye toward detail and pacing, brimming with laughs, gore, friendship, and dismembered appendages – but utterly lacking in cynicism or irony – it’s a blast of a film with a lot to offer.

← I Throw Food in Your General Direction
Simply Complex →
Scroll Up