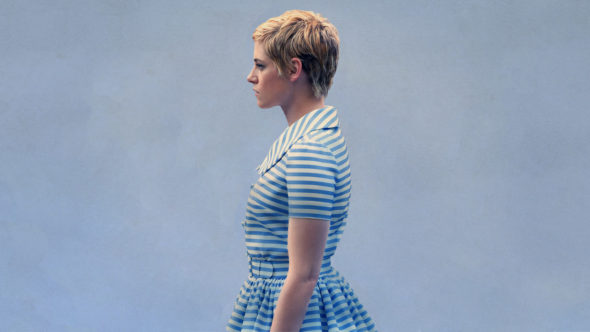 Another film on the blonde 60s starlet who died far too young, and under mysterious circumstances? Yes, a starlet, but not Monroe.

She may not have been the icon Marilyn was, but Jean Seberg’s celebrity life and tragic death had its own “Candle in the Wind” comparisons, all embodied with beguiling grace by Kristen Stewart even when Seberg falls back on superficiality.

Seberg’s breakout in 1960’s Breathless made her a darling of the French New Wave, but Jean was an Iowa native. As the winds of change in her homeland began raging, Seberg took an interest in the counter-culture that was strong enough to make her a target of the FBI.

Director Benedict Andrews anchors the film in Seberg’s involvement with the civil rights movement, and her relationship with activist Hakim Jamal (Anthony Mackie). Two FBI agents (Vince Vaughn and Jack O’Connell) report Seberg’s status as a “sympathizer,” and the increasing surveillance throws her life into turmoil.

Andrews, a veteran stage director, seems most at ease recreating Seberg’s glamorous life, enveloping the film in an effective old Hollywood gloss and Stewart in consistently loving framing. She responds with what may be her finest performance to date.

We meet Seberg when she is already a star, and Stewart conveys a mix of restlessness, conviction, selfishness and naivete that is never less than compelling. In just over an hour and a half, Stewart takes Seberg from confident fame to paranoid breakdown, and the arc always feels true.

O’Connell leads the strong supporting cast (also including Stephen Root, Margaret Qualley and Zazie Beets) with a nuanced performance as the young agent with a nagging conscience. But while the script from Joe Shrapnel and Anna Waterhouse (The Aftermath, Race) wants to draw comparisons with more recent government overreach, Andrews has trouble meshing the FBI thriller with the introspective biography.

Too much of the spying agenda (“This comes from above!”) seems paint by numbers, but it never sinks the film thanks to Stewart’s command of character. Much like her Twilight co-star Robert Pattinson, Stewart has followed her blockbuster fame with a string of challenging projects and impressive performances.

In case you’ve missed any, Seberg is a good place to start catching up.

← Just Another Tricky Day
Call to Action →
Scroll Up